Victorians at the Beach

Early Victorians generally had little interest in visiting the ocean for any reason, but somewhere around the mid-1800’s doctors started recommending spas and mineral waters as a cure for many ailments. Natural hot springs – like the Glenwood Springs mentioned in an earlier Blog article – became popular places for fashionable Victorians to go to “take the cure”. Eventually, they discovered the charms – not to mention the relaxing properties – of visiting the seaside, where fresh air and moderate exercise provided a welcome break from being confined to the large, dirty cities, where the air and water were frequently badly polluted. One doctor, Richard Russell, promoted the drinking of sea water as a cure-all for diseases from jaundice to gout. At first these pleasures were only for the wealthy, but eventually, the middle classes also came to enjoy visits to the seaside, where they could mingle with the upper classes in an environment that tended to break down class differences. 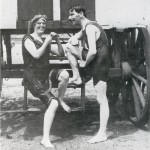 Swimming in the ocean was not usually the object of visiting the coast; it was the afternoon promenade that was the primary focus of each day. Ladies clothing was based on what they would have worn while in the city, but the fabrics were lighter weight – even sometimes sheer – and usually made up in lighter colors. Hemlines were a bit shorter, and trains were dispensed with entirely. Ever conscious of keeping their ivory complexions intact, ladies wore large-brimmed hats, sometimes called “uglies”, and carried parasols to keep their skin safe from the direct sun. 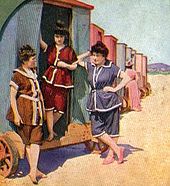 Always the adventurous young wanted to push the boundaries, and swimming in the ocean became popular for ladies and gents. However, most women did not actually swim. “Bathing machines” were the rule for Victorian ladies. This machine was a small cabana on wheels. The lady would go into the cabana to change into her bathing costume, and while she was inside, the entire thing would be wheeled into the surf. She would then be assisted out the door – 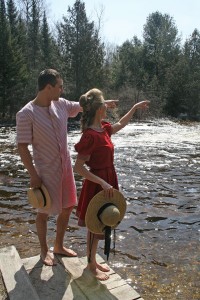 which would face away from the beach to ensure privacy – and into the water. When she was done, she would be helped back into the bathing machine, which would then be wheeled back up onto the shore. It wasn’t until the very end of the Victorian age, at the start of the Edwardian period, when women actually started walking around on the beach in their bathing costumes.

Victorian Swimsuits were generally made of wool. The bathing suit top was based on a standard ladies’ jacket, which would have short sleeves, and close with buttons down the front. The hemline of the jacket extended into a long peplum that made a knee-length skirt. Under this skirt would be loose trousers that came to mid-calf, or sometimes ankle-length pantaloons, which were very loose except where they were gathered at the ankle. Special shoes, which laced up the calf, were also worn. A small bathing cap, usually gathered up similar to a mob cap, completed the ensemble.

In the Edwardian era, swimwear was still made of wool. The style, however, had become more relaxed. The necklines of bathing suits had opened up somewhat, and the entire top was generally looser fitting than before. The pantaloons were also shortened to about knee length. Once it became socially acceptable for ladies and gents to appear in public in their bathing costumes, bathing machines became a thing of the past.

We invite you to shop our assortment of history-inspired swimwear for women and men (in more comfortable fabrics). Thanks for stopping by!