“The Doctor wore Petticoats” and other books by Chris Enss 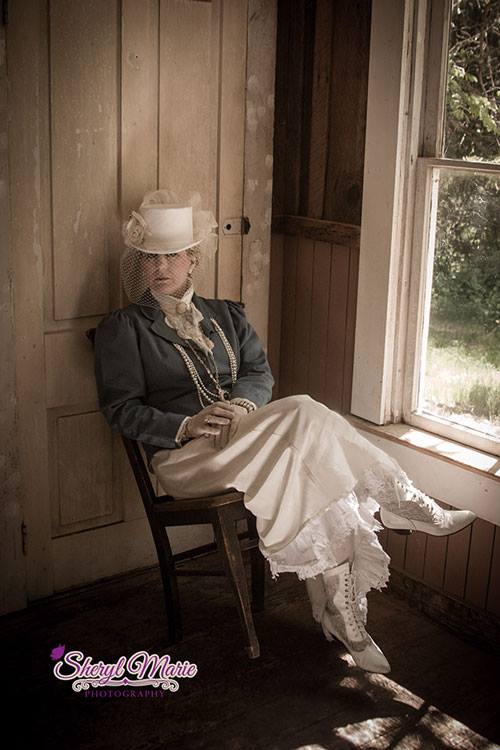 A prolific author with more than 20 books to her credit, Chris Enss really gets into the characters she writes about when she tells the tales of the women who populated the America’s old west. She chronicles such interesting ladies as mail-order brides, frontier teachers, and Cheyenne Indians. Most recently, Chris is working on a book about Libby Custer. Chris gets into the Old West spirit quite literally, as she likes to wear Recollections gowns when she meets her fans at lectures and book-signings. She came to our attention at Recollections when she mentioned wearing our clothing to these events.

Chris began her book writing career in 1998.  She was working on a scenic byway travel tape for the forest service in Northern California, and while doing the research she was amazed at the lack of information available about women of the Old West.  She then set out to gather all the information she could find about the ladies who came west with the Gold Rush. Her goal was to be able to tell the stories of these intrepid pioneer women. The first book was entitled “With Great Hope:  Women of the California Gold Rush”. With this book, Chris began to establish herself as the voice of those long-ago ladies.

Chris especially loves the challenge of working on stories about women few know anything about.  She sites one Nellie Pooler Chapman for example.  Miss Chapman was the first licensed female dentist in the Old West.  The tales of the mail order brides who ventured over the plains to marry a man they never met also fascinate her, and stories of the soiled doves are always interesting.  She wrote one book entitled “The Doctor Wore Petticoats:  Women Physicians of the Old West”.  This book, Chris says, “Has to be my favorite. Women did many remarkable things in their quest to tame the wild frontier.” she adds.

Chris says that when she does book signings she takes “many small jaunts”.  Last summer Chris spent two weeks on a tour, and is planning to be out again this summer for the same length of time.  She says, “It’s a joy because one day I can be in historic Dodge City and the next in Deadwood.  I love passing through history.”

Chris’ passion is to continue telling the tales of the ladies who ventured beyond the Mississippi and made a name for themselves in a world dominated by men.  She says she is inspired by the “daring” of ladies like entertainer Kate Rockwell, Kate Warn (the first woman investigator for the Pinkerton Agency), or Luzena Stanley Wilson, a business woman who made a fortune selling biscuits to miners in 1851.

Chris dresses in period costume each time she meets her public.  According to Chris, “An outfit from Recollections draws people into the talk and prompts questions from the audience about the time period and women of that day.  My Recollections garments are a part of my job.  They enhance the theme of the lecture I present and the clothes are attention getters.  My job would be diminished without Recollections.  From the material to the cut and design, Recollections clothing make a statement.”

We at recollections must agree with Chris’ assessment – as you can see by the pictures on her site and those that accompany this article. Chris uses more than just words to draw her readers into the past with her as she shines a light on those ladies who helped to shape America’s Old West!

You can find out more about what Chris has done (and what she is currently working on) at her web site: http://chrisenss.com/