The Most Extraordinary Story of Sister Blandina Segale – Pt. 2

What Made Sister Blandina Segale’s Service in the Old West Extraordinary?

Sister Blandina Segale wrote a memoir of her time in Colorado Territory, titled At the End of the Santa Fe Trail. Stories of her adventures while serving in the Old West have been featured in novels, television programs, histories, and even a comic book. The CBS series, Death Valley Days, featured her story of bravery during the 1966 episode, “The Fastest Nun in the West.” The most enduring stories follow. 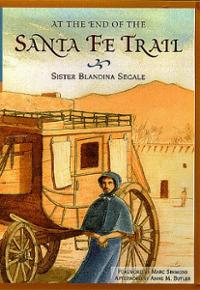 Standing Up to Billy the Kid

One of Billy The Kid’s gang was shot and while on the brink of death, four different doctors in Trinidad refused to treat him. Sister Blandina nursed him through the worst and back to health over the course of three months. However, Billy was out for revenge and word reached Trinidad that he was coming to town to scalp the four doctors who refused to treat his friend. Sister Blandina found him before he could do anything and convinced him to call off his mission on behalf of the man she saved.

Billy the Kid Becomes a friend of Sister Blandina

After this incident, Billy the Kid considered her a friend. She visited him in jail. Once, when he was on a stagecoach robbing expedition, he picked one in which Sister Blandina was a passenger. Upon seeing her as a passenger, he is said to have tipped his hat and kept on riding.

Staring Down a Lynch Mob

While teaching school in New Mexico, the father of one her students shot a man and a lynch mob was going to hang him. She immediately went to the boy’s father and convinced him to write a confession. Then, she met with the dying man, convincing him to forgive the shooter before he passed away. Sister Blandina then faced down the lynch mob and the shooter was taken to the circuit court, where he was given a sentence of life in prison. The man was released after nine months so he could return home to care for his four children.

Sister Blandina was tough, spunky, holy yet unafraid of conflict. She not only worked on behalf of those without power or a voice, but she’d also address the ‘why’ behind what was happening to the people she was helping. She worked on charitable causes and social justice.

After returning to Cincinnati, she founded the Santa Maria Institute in 1897, serving immigrants. She lead the organization until 1933. Today, the institute still serves the poor and marginalized. Sister Blandina returned to Albuquerque from 1900 – 1902 to help start the St. Joseph Hospital. The mission continues to this day as CHI St. Joseph’s Children, also known as St. Joseph Community Health.

She died in She died on February 23, 1941, exactly one month after her 91st birthday. Her ministries continue today, more than one hundred years later. The cause of her canonization as a saint in the Roman Catholic Church has been approved by the Vatican, giving her the new title, Servant of God.

Recollections designs and sews history-inspired fashions for women. We hope you are inspired by this remarkable woman from history.