Thanksgiving During the Gilded Age

Thanksgiving is here! As I thought about the holiday, I wondered what it was like during the glory years of the characters on Downton Abbey. I know the British don’t celebrate Thanksgiving, but  what was it like for their American counterparts? What was Thanksgiving like during the Gilded age in the United States?

The middle class celebrated with big dinners at home, much as families who gather today. And, just as today, there was no lack of magazines and cooking classes to help make the meal a beautiful spread. We have this Norman Rockwell vision of Thanksgiving, and many of us, myself included, think the holiday has always been celebrated at home, with friends and family. But, dining out for Thanksgiving was quite the experience and very popular for the wealthy during the Gilded age. I had no idea!

Thanksgiving dinner was often billed as a banquet and contained a lot more than turkey, although traditional turkey with trimmings was on the menu at hotels and restaurants such as Delmonico’s in New York City. In an interview with Jon Hanc for Smithsonian.com, Peggy Baker, retired director and librarian of the Pilgrim Hall Museum in Plymouth, Massachusetts, related how she happened upon this forgotten period in American history. She discovered a Thanksgiving menu from 1894 for the luxurious four-course meal at the Hotel Vendome in Boston at a sale in the area. This sent her on “an expedition to a different culture. I wasn’t aware the people dined out as a regular annual event for Thanksgiving, It was just so foreign to me.” She acquired more than 40 menus from the period, which resulted in a 1998 exhibit titled “Thanksgiving a la Carte.” 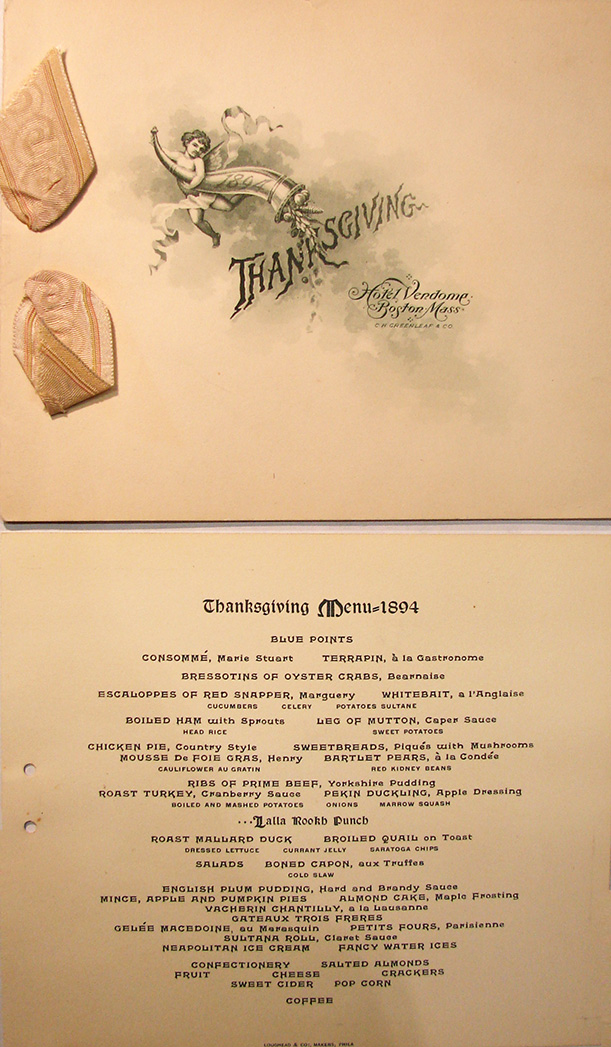 Hotel menus of the late 1800s were the more than a disposable way to list daily specials. Holidays and special occasions were opportunities to create fantasy menus with whimsical designs and and wonderful colors. It wasn’t unusual to see menus with fringe, embossing, texture, silks and ribbons. They allowed the creative mind to showcase imagination, much like the chef behind the banquet.

World One, Prohibition, and the growing female workforce helped bring on the decline of haute cuisine for Thanksgiving. Delmonico’s (New York City) was the first fancy restaurant and ruled supreme for much of the Victorian era an Gilded age, but even it couldn’t survive the changes brought by these events. Delmonico’s closed in 1923. Haute cuisine would not see a rebirth until the 1940s. 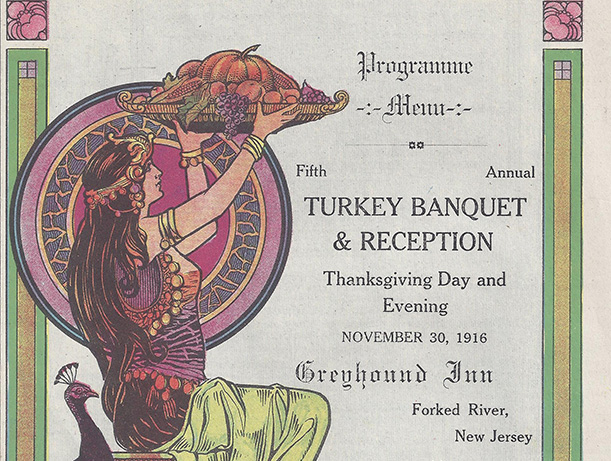 I hope these tidbits have fueled your desire to know more. What was on these menus and what did they look like? Please visit Edwardian Pomenade for an excellent article on what the home cooked meal would have been like during the Gilded age. To find out more about what those fancy meals in the grand hotels and restaurants of the era, visit Smithsonian.com. To see more of the menus, visit the Pilgrim Hall Museum.