The tea gown is the epitome of the charm of the late 19th century and early 20th century. Originally meant as a pretty, fashionable, and comfortable garment to wear at home, it grew into a fashion staple that is still loved today.

An 1883 article on hygienic dress describes how indispensable the garment had become.

“As its use usually enable ladies to dispense with the corset, the hygienic value of the tea-gown is apparent. It has been stated that some ladies wear corsets underneath their tea-gowns, but they are in a small minority…the wearing of it is a fashion which, it may be hoped for the sake of those who follow it, may be more than a passing fancy.”

What is a tea gown?

Early tea gowns were rather unfitted with pleating in the-the front; resembling a Regency-era gown. The back was a loosely draped train, giving it the bustled feel of the formal garments of the day. A lady could allow herself creative expression by coordinating her dress color with the décor of her parlor. Fabrics were lighter in weight and details were delicate. Tea gowns often resembled an evening gown with a ‘wrapper’ or outer robe.

“Everyone knows that a tea-gown is a hybrid between a wrapper and a ball dress. It has always a train and usually long flowing sleeves; is made of rather gorgeous materials and goes on easily, and its chief use is not for wear at the tea-table so much as for dinner alone with one’s family. It can, however, very properly be put on for tea, and if one is dining at home, kept on for dinner. Otherwise a lady is apt to take tea in whatever dress she had on for luncheon, and dress after tea for dinner. One does not go out to dine in a tea-gown except in the house of a member of one’s family or a most intimate friend. One would wear a tea-gown in one’s own house in receiving a guest to whose house one would wear a dinner dress.”

Not only were they more comfortable, they were also easy for the wearer to put on without the help of a maid. This ease and comfort led to some naughty connotations for the tea gown that survive today. Tea time became known as an opportunity for a lady to entertain her lover (while her husband may be visiting his lover during the same hours). 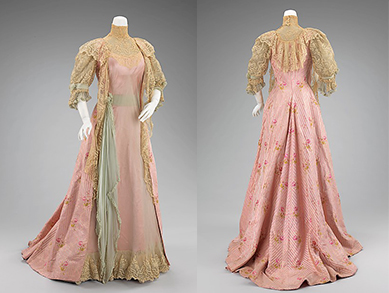 The Edwardian Tea Gown: not just for tea

By the start of the Edwardian era, the tea gown was no longer confined to a lady’s parlor. It traveled down the hall and into the dining room and beyond. Women were now wearing them for dinner and other certain events with family and close friends. Women also wore them to intimate events at family and friends’ homes, bringing the tea gown out of the home. A day tea gown often featured a high neckline while those intended for evening wear sported a more daring neckline.

As the tea gown became more accepted in society, tea time became more flexible, allowing people to visit on outside porches and in gardens. They became a staple in women’s wardrobes during the teens and early 1920s. Most summer tea gowns of this time were made of white eyelet, embroidery, or lace inset sheer gowns. Darker colors were featured during cooler months. Tea gowns remained popular throughout the 1920s and into the 1930s.

Create a perfect Edwardian afternoon look of your own: 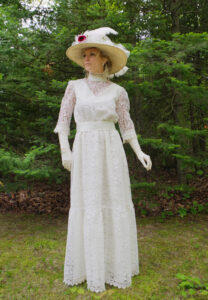 The Truth About the Edwardian Hobble Skirt