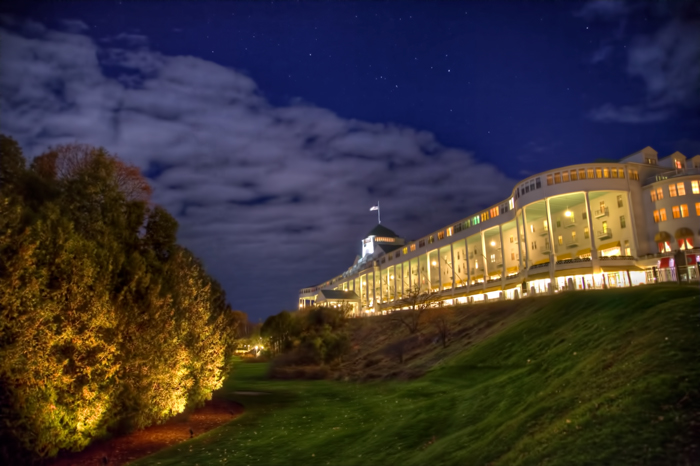 Madelyn Le Page is probably THE most faithful attendee of the “Somewhere in Time” weekend at the Grand Hotel every fall on Mackinac Island. She and her husband have attended all of the “SIT” weekends except the first one.  So, she believes that’s been 22 weekends that they have attended.

One of the many people who fell in love with the movie “Somewhere in Time” after seeing it when it was first released into the theaters in 1980, Madelyn has been a faithful follower ever since.  Always a fan of Mackinac Island, she followed the filming of the movie when it was being shot on the island in 1979.  She actually considered going to the island in the summer of 1979 and being an extra in the film, but was taking summer classes at Wayne State University and couldn’t get away. 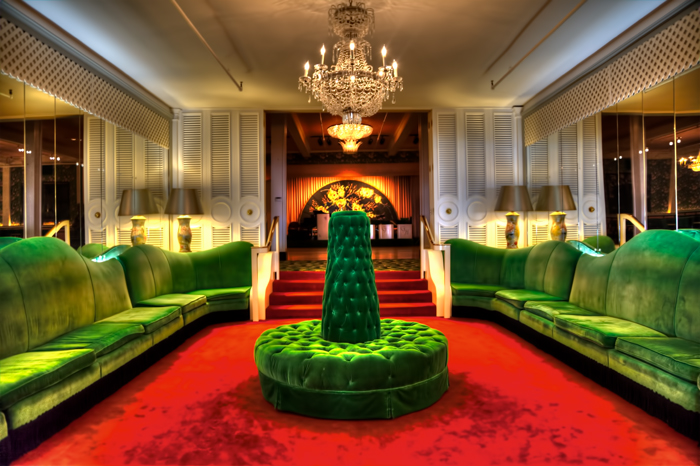 When she met her then-future  husband, she asked him if he had ever seen the movie – he had not.  So they watched it on cable and she says, “He enjoyed it almost as much as I did.” They were married in September of 1983, and their son was born in May of 1992.  They named him Richard Collier after Christopher Reeve’s character in the movie.

Madelyn can’t recall how she first heard about the “Somewhere in Time” weekend at the Grand Hotel, but thinks it may have been through the “Mackinac Island Town Crier” (which she has subscribed to for years).

When she first heard about the weekend, they had already held the first one, but she and her husband decided to go to the second one, and have attended every one since. Their son, Richard Collier Le Page, was still in diapers when he attended the weekend with his parents, and he attended every year with them through high school. When he was 2 1/2 years old, his aunt made him an “Arthur” costume (complete with a big red ball) and he was quite the hit that year. 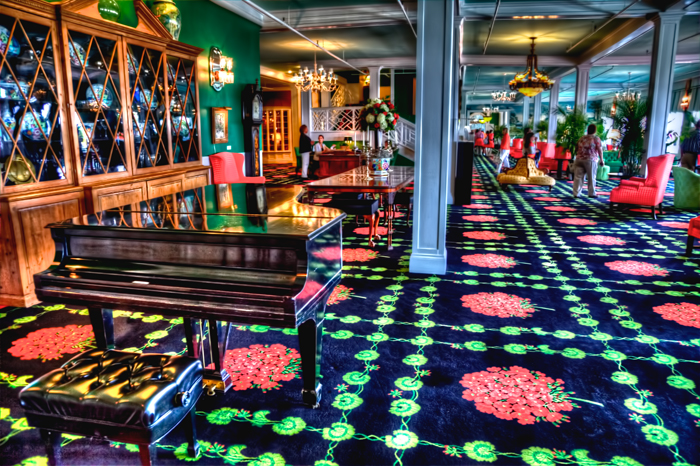 They have kept going back to the weekend every year, Madelyn says, “Because it was so enjoyable – The attendees were a wonderful group of people, and we love being on the island in the fall (when the tourist season is mostly over). And we enjoy all of the costumes and events that were part of the weekend.”

Madelyn’s husband has attended every single weekend with her.  She reports that he loves the island, and enjoys going hiking/biking around the “rock” 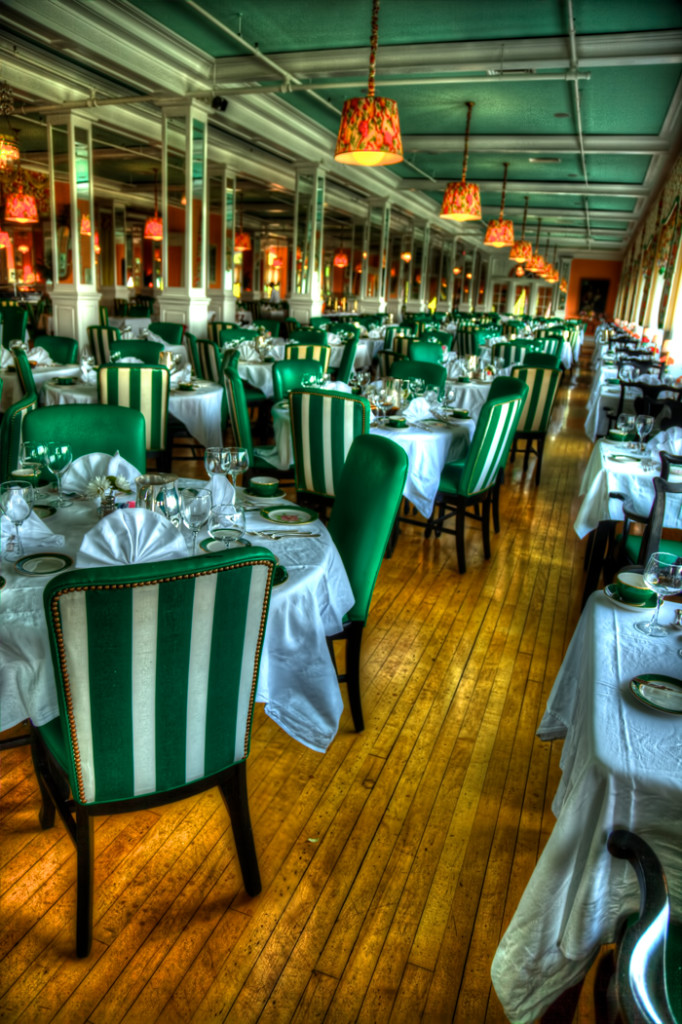 when most of the tourists are gone.  Unfortunately, she says, he doesn’t dress up for the activities.  He is a “jeans and T-shirt” kind of guy and even hates the requirement of a suit and tie for dinner at the Grand. “But he’ll put up with it to get the delicious dinner they serve”, she says.

Her favorite thing about the weekend?  Getting to see old friends again and catching up on all that is going on in our lives.  Madelyn’s second favorite thing is the costume promenade on Saturday evening.  “I LOVE seeing all of the beautiful clothing worn by the attendees!” she says.

Not simply a fan of the movie and the Grand Hotel, Madelyn has been a member of the “International Network of Somewhere in Time Enthusiasts” since the inception of the organization.

Madelyn hasn’t always dressed in period attire for the weekend. She says that for about the first 10 years that she attended the event, she didn’t wear period clothing – mostly due to the fact that she was unable to find Victorian/Edwardian clothing in her size.  “Then I discovered Recollections”, she says, “Since then, I have dressed up every year that I have attended the event.  Since the movie was set in 1912, the clothing really should be “Edwardian” to be period correct.  However, I tend toward the “Victorian” designs.  I have seen all kinds of period attire at the weekend (not just Edwardian).  It really doesn’t seem to matter.  Everybody just seems to enjoy dressing up.” 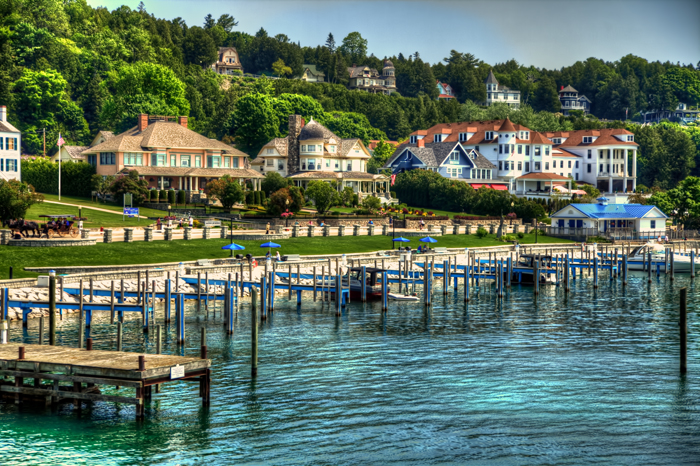 Madelyn and her husband don’t just stay at the hotel while visiting Mackinac Island; they have explored the entire island, and have enjoyed checking out many of the geological features of the island (the caves, the crack in the island, etc).  They are also heavily involved in a sport called “Geocaching” (www.geocaching.com), which is basically high-tech treasure hunting, and their organization has exclusive rights from Mackinac State Parks to hide caches on the island. The Le Page family also hosts an annual geocaching event on the island at the end of April at the Grand Hotel.  “This was the 8th year that we’ve hosted the event.” Madelyn reports, “In 2013, we had 200 people attend the event.  This year, it was much less, as everyone had to fly over to the island due to the ice in the Straits.  Now this activity has nothing to do with the “SIT” weekend, but it lets you know that we do other things on Mackinac other than attend the “SIT” event.”

Madelyn and her husband don’t attend other period-themed events at the Grand Hotel, like the “Titanic” weekend in the spring. However, they stay at the Grand Hotel “probably a half-dozen times a year”.  Including the annual “Spring Fling” geocaching event on the island, Madelyn goes up any time she can get a “deal” at the hotel.  “I look for the “Pure Michigan” deals that the Grand offers several times throughout the year.” She says, “You can get a room at the hotel for less than 50% of the regular rate.  In fact, I have stayed at the Grand SO many times, that I personally know many of the  management people who work there (yes, they know me by name). Problem is, since I’m known, I can’t get away with anything!” 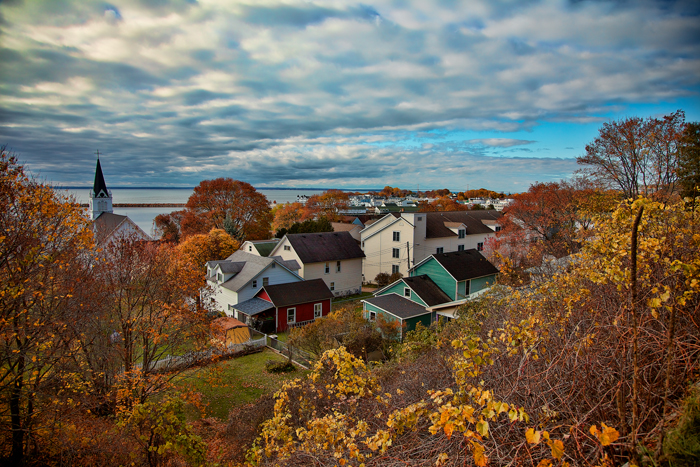 Madelyn frequently recommends the “Somewhere in Time” weekend to others. “There’s the appeal of being on the island in the fall, when the mass of tourists have left the island” she says, “There are also the events sponsored by the weekend, which are quite enjoyable.”  In addition there is the opportunity to meet some really wonderful people, all of whom share the same love for this movie that she does.

In 1994, Madelyn had the opportunity to meet Christopher Reeve in person when he came to the island to attend the weekend.  This was the October before his tragic accident.  She had her two-and-a-half-year-old son with her at the time. “Chris was THRILLED that my son had been named after his character in the movie.” 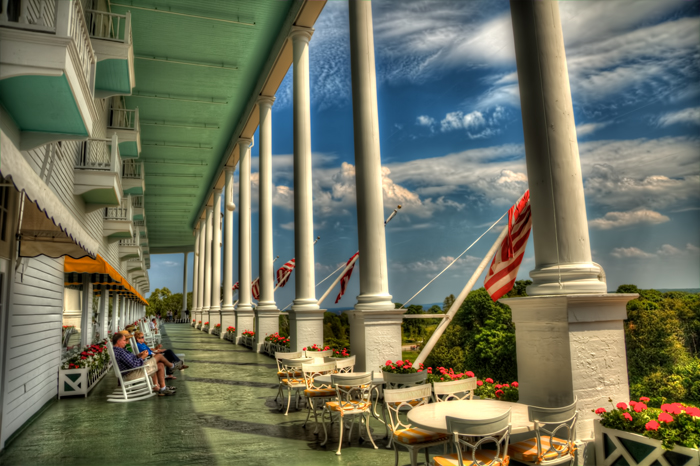 Says Madelyn, “In fact, Chris has a son that’s only a month younger than mine, so we spent some time talking about the challenges of handing “the terrible two’s.”  Chris was quite humble, and was amazed that “SIT” had such a following.  He graciously signed autographs for hours, and talked with fans far into the night.  He also rode the ferry back with us to the mainland when we left the island.  That was the BEST “SIT” weekend EVER!”

Photo credits:  All photos on this page by Joey B. Lax-Salinas and are licensed under a Creative Commons Attribution-NonCommercial-NoDerivs 3.0 Unported License. Permissions beyond the scope of this license may be available at http://www.joeyblsphotography.com.