On the northern edge of Alpena, not far from the Thunder Bay River, is a gem of Northeast Michigan called the Besser Museum.  Named for Jesse Besser, a pioneer in modern concrete technology, the museum is home to a variety of exhibits.

Each year, the museum hosts a “Season of Light” gala as a fundraiser and as a way to bring together members and patrons for som end-of-the-year merriment.  This year’s theme was “A Classic Christmas,” and celebrated the new Alpena Flyer Exhibit and the Nutcracker Ballet.  The gala was held on November 22, 2014. 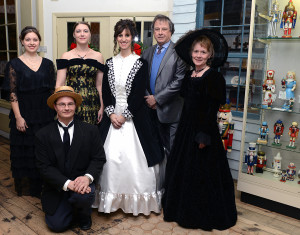 Museum Executive Director, Christine Witulski, staff and volunteers, showcased Recollections fashions for the gala.  Most were dressed in Victorian era clothing that felt right at home in the Avenue of Shops exhibit or Edwardian fashions that would have been worn during the years the Alpena Flyer was produced.  Wearing the garments added ambiance to an already magical evening! 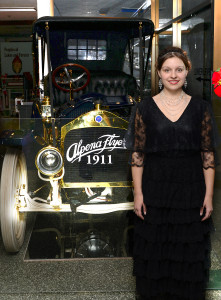 Recently, I explored the museum with a young friend.  The Alpena Flyer greeted us as we walked through the door.  It is quite an impressive!  The Flyer was a solidly-built automobile offered for sale from 1910 – 1914.  A total of 480 vehicles were produced by the Alpena Motor company.

The next place we stopped was the Toy Shop in the Avenue of Shops exhibit.  Around the corner, we found hats from the Victorian era on display in the Millinery.  I sensed the age of what I was seeing, and I could envision the people who wore them. The bellows in the blacksmith shop loom large, ready to stoke the fire that helps the smithy shape metal into whatever he wants.  I don’t think I’ve ever seen a lathe as large as the one on display in the woodworker’s shop! 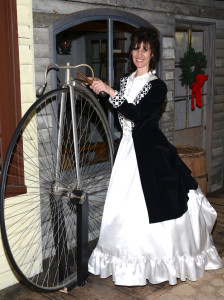 Soon, we investigated the lower level where we not only viewed the Natural Wildlife Gallery, but also enjoyed some hands-on activities that involved pelts, antlers, jaws, and feathers! He was fascinated with the Foucault Pendulum free-swinging over a big compass on the floor.  We were fortunate enough to witness the rotation of the earth through the knocking down of one of the pegs!

Currently, there is juried art exhibit in one of the galleries.  The artwork is imaginative and creative and is on display through December 31.  I enjoyed taking in the paintings lining the walls.  They are all winners in my book! 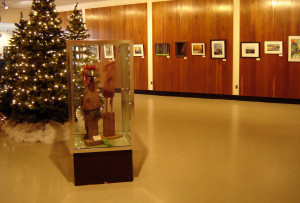 We took in the planetarium; the only one in Northeast Michigan!  The current show revolves around the current “Season of Light” and how from ancient times, light during the darkest days that surround the shortest day of the year has been a part of our human culture since practically the dawn of time.  I also enjoyed learning more about what I’m seeing in the night sky on clear winter nights!

The geological and leaf displays are already drawing us back for another visit, as we certainly didn’t have enough time for the whole adventure this museum offers.  It was too cold to explore the fossils and historical representation buildings dotting the property.  So, we have a date during spring to return for some more fun at the Besser Museum!

Many thanks to Christine Witulski for sending along photos and for taking the time to talk to me about the museum.  Visit the Besser Museum online at http://bessermuseum.org.