Lily Elsie came into this world as Elsie Hodder on April 8, 1886. Her mother was Charlotte Elizabeth Hodder, a dressmaker who operated a lodging house in Armley. Leeds, Yorkshire. Less is known about her father, although the obituary of Arthur Borrows, a one-time opera tenor, in 1928 indicates that Lily was his daughter. (Keaton) Lily’s mother married William Cotton, a theatrical baggage manager, in 1891. He subsequently adopted Lily.

Lily entered the theatrical world at a young age, probably because of her step-father. She exuded a rare beauty, even as a young child. It didn’t take long for her to become known as ‘Little Elsie.’ She performed as a child impersonator in music halls around Manchester, where the family settled, and Salford. By 1896, she was appearing in Christmas plays in Manchester. She took on the stage name of Lily Elsie around 1900.

By 1901, she was living in London with her mother and pursuing other acting opportunities. After a rocky start with George Edwardes, impresario, and father of the musical comedy, she went on to appear in many of his productions at The Gaiety and Daly’s Theatre.

Her acting and singing abilities, as well as her beauty, lent a hand in the growing popularity she enjoyed over the course of approximately 14 productions in which she appeared between 1901 and 1907. When she took over the role of Princess Soo-Soo in the musical A Chinese Honeymoon in 1903, she caused a stir by wearing a wig and makeup that made her portrayal more realistic, something that was not done at the time. 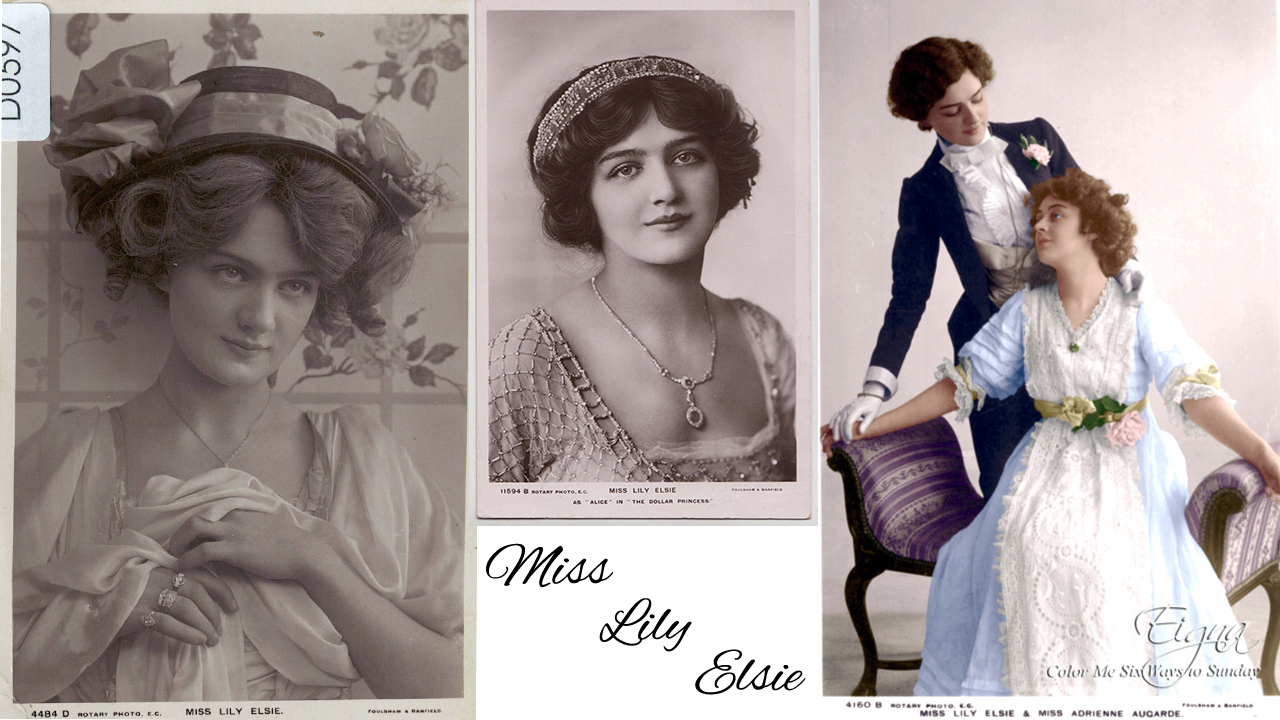 A theater is only a success when it is filled with a paying audience. George Edwardes found that Daly’s had a huge hole in programming coming up in 1907. He needed a stop-gap show. A new musical, The Merry Widow was playing in Berlin and he thought it would fit nicely into the schedule.

He thought of Lily for the lead role of Sonia. She was talented and  She didn’t see herself as a leading lady, though. She was painfully shy and lacked confidence. So, Edwardes took Lily to Berlin to see the production. She was so overwhelmed by Mizzi Gunther’s performance as Sonia that it only served to reinforce her fears. But, no other leading actress was available and Edwardes saw something in Lily that she didn’t see in herself. He prevailed, and with a little bit of help, she was an overnight sensation.

The little show that was going to plug a hole at Daly’s went on to run for  788 performances and enjoyed a successful tour in August of 1908! It launched Lily Elsie’s career and it also launched a new hat style that became known as the Merry Widow hat. Big enough to sit nicely on her luxuriously thick curls with a very wide brim, the Merry Widow hat was in style from the time the show opened in 1907 until about 1914. Women also emulated the costumes she wore in the play.

Lily wasn’t only talented, she was extraordinarily beautiful. Her fame and beauty led to her image appearing in many advertisements and on postcards of the day. She is perhaps one of the most photographed women of the Edwardian era. But, all was not merry. We’ll explore more of her life in part 2.