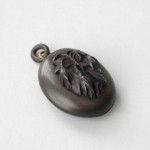 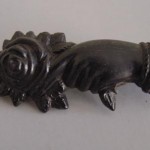 Today it may seem to us that Victorians had a rather morbid fascination with death, however it is probably we who are now so insulated from this part of life, are overly sensitive to the topic. In the late 1800’s one in twenty infants died before their first birthday, and during the Civil War (1861 – 1865) thousands of men died in America, with the south being especially hard hit. Human hair is very durable, and it was common practice to clip a lock of the deceased’s hair to keep. Jewelry that carried a lock of the loved one’s hair, or perhaps a tiny portrait painted on a bit of jet served as fond remembrances to those left behind. These mourning pieces “momento mori” (“remember you must die”) are now rare and very collectable.

In the Victorian era, the color black was considered very fashionable. This was especially so with jewelry. Black was also the color of mourning, and mourning jewelry was nearly always made up in black material, though sometimes seed pearls were incorporated as they represented tears. Many materials were used to create mourning jewelry, including jet (a compact black variety of lignite), gutta percha (the sap from a tree that grows in Malaysia), horn, vulcanite, enamel, and French Jet, which was actually black glass manufactured in America were all pressed into service for the purpose of making mourning jewelry. When her beloved Prince Albert died, the grieving Queen Victoria dictated that only jet was to be worn. For a long period, jet was the only acceptable material for a widow to wear during full mourning (the first year after a spouse’s death). The second half of mourning, also called half-mourning, the other materials mentioned above could be worn.

Mourning jewelry was not limited to women; remembrances were also fashioned into watch fobs and rings as well as brooches, bracelets, and earrings. It was common practice for a lock of hair to be fashioned into an intricate knot, which would then be placed in a brooch, or perhaps in a compartment of a piece of jewelry. Sometimes a woven piece of hair would surround a tiny portrait or photograph of the departed loved one. Often this type of jewelry also featured flowers; each flower had meaning to Victorians – the most notable for mourning jewelry being the forget-me-not. Sometimes these items were engraved, and these – especially if they are also dated – are extremely collectable. Since it is very difficult to make repairs on jewelry that incorporates hair weaving, pieces that are in good condition are very sought after.

Not all hair jewelry is mourning jewelry. The practice of making hair jewelry became very fashionable late in the Victorian era, and lady’s magazines sometimes printed articles on how to make ornamental objects from hair. Some fairly large items made in this way – such as hair wreaths – might be a collaborative effort by several women – each perhaps contributing a different shade of hair to its construction.