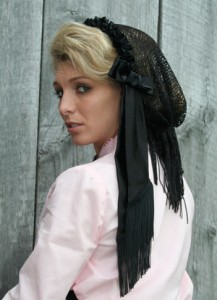 Have you seen the lovely snood among Recollections newest products? The snood – historically worn by European women – has a very long history, and the word is first recorded in Old English sometime around A.D. 725. Snoods were widely worn in the Middle Ages, and the term “snood” was applied to a variety of head coverings made of either cloth or net. Snoods have been more or less in continuous use since that time, as they are a convenient way to keep the hair under control especially when performing work where one’s hair might fall forward and become a nuisance. Typically, a snood consisted of a small bag made of fine thread that would be knitted, tatted, or crocheted into a net that was large enough to capture a lady’s hair at the back of her head. Usually the edge of this net had a more tightly woven edge, which would form a band that would go over the head, behind the ears, and around to the nape of the neck.

In the 1860’s, snoods came back into fashion, and although the English word “snood” was still use in Europe, American Victorians called this particular type of headwear a “hairnet”. As with everything the Victorians adopted, the now-fashionable snood was often made of very fine material, which matched as closely as possible the wearer’s own hair color. Instead of simply holding hair out of the way while working, snoods were worn over carefully styled hair. Thus they were very different – and far more elegant than the previously utilitarian hair covering from earlier times.

If you have never worn a snood, it is worth a try. If you have long hair, its advantages need no explanation.  If you have short hair, wearing snood is a great way to give the illusion of having longer hair. This effect is especially nice if you dress in period attire. The snood in Recollections current collection is a particularly nice example, and certainly dressy enough to wear with your favorite gown – perfect for your next Victorian outing or tea!