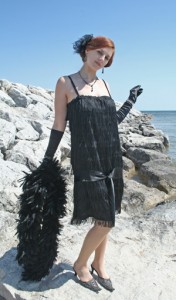 Oh! Those Roaring 20’s! The older generation must have been convinced that the world was rushing down the road to perdition, as their daughters took full advantage of newfound freedoms. This was the age of jazz, women’s liberation, and a sudden loosening – indeed smashing – of the rules of society that were iron-clad only a few years before. Women – who now had the vote – went about in public without chaperones, rid themselves of corsets, shortened their dresses to above the knee, and indulged in “lewd dancing”, smoking in public, and drinking hard liquor. In addition, they chopped off their hair and put on LOTS of the new pancake makeup and surrounded their eyes with kohl. Their lips were painted bright red – the only color available. They plucked out their eyebrows – sometimes completely – and re-drew their brows darker and higher than they had naturally been.

Of course these ladies also adopted fashions that were entirely different than in previous decades. The styles of the Roaring 20’s – epitomized by the iconic image of the Flapper – were worn loose and skimming over the boyish figure that had become the new ideal. Instead of cinching in their waists, women now used “flatteners” to reduce their bust lines so that they could have the “boyish” silhouette that was in vogue. Large-breasted women turned to bandaging their breasts flat, and many adopted the “Symington Side Lacer”, a bra that could be laced at both sides and pulled in to flatten the chest. The waist disappeared, and hips were to be slim.

For most of the 20’s, skirt lengths were still about mid-calf. It was only in 1926 and 1928 that the knees were revealed before the hemlines once again descended. All things oriental were fashionable, and dresses often featured many layers of very sheer fabrics which floated over the body. Stockings were rolled into garters just below the knee, and were often flesh toned to give the illusion of bare legs. The arms also were often bare – even for evening wear. 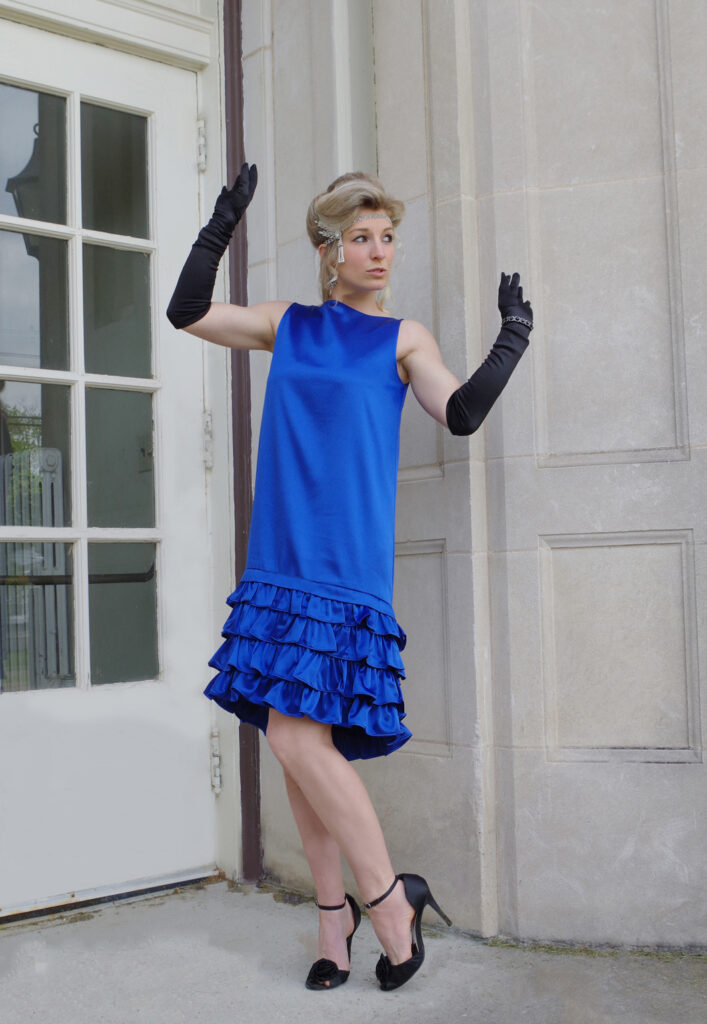 Hairstyles became shorter and shorter as the age progressed, most often cut into a bob that ended above the jaw line. The back of the hairstyle might be cut into a high, short “V” at the nape of the neck, and the hair itself was often encased in gel that held the (scandalous!) Marcel waves in rigid place. The most severe – and shortest – hair style that became popular was the “Eaton Crop”, which was buzzed off higher than the earlobes. Headbands were popular evening wear, and often a feather or other ornament adorned the band.

1920’s coats – which were all about mid-calf with the exception of 1926 styles – tended to be wrap-over style. The front would wrap around to one side, and be fastened with an enormous button or buckle. Coats often featured large shawl collars, sometimes made of fur. Because of the shorter skirt length, shoes were now visible, and had to be selected with a care to fashion. T-straps and “Mary Jane” style shoes became popular, as the 20’s saw the mass-production of shoes made available to the public. Shoes were sometimes decorated with buttons, sequins, or beads.

The entire look was made for youthful set. Those fortunate few who had the bodies of pre-pubescent teens and the stamina to dance the night away would become the representatives of the Roaring 20’s that we look back upon today.