The Great Exhibition of 1851: Global Culture and Industry Comes to London

All eyes were on Queen Victoria and Prince Albert as the Great Exhibition celebrating international culture and industry opened on May 1, 1851. Until then, similar exhibitions took place on a smaller, national level. Upon return from an exhibition in Paris, Henry Cole brought the idea of an international celebration to Prince Albert. Conceived by the prince as a way to promote international understanding, brotherhood, and peace, the exhibition ran for 141 days. Tickets were offered at various prices which allowed everyone to attend.

A glimpse into what opening day was like is found in Queen Victoria’s journal. This excerpt is from her journal as found at the Victoria and Albert Museum:

‘This day is one of the greatest and most glorious of our lives… It is a day which makes my heart swell with thankfulness… The Park presented a wonderful spectacle, crowds streaming through it, – carriages and troops passing… The Green Park and Hyde Park were one mass of densely crowded human beings, in the highest good humour… before we neared the Crystal Palace, the sun shone and gleamed upon the gigantic edifice, upon which the flags of every nation were flying… The sight as we came to the centre where the steps and chair (on which I did not sit) was placed, facing the beautiful crystal fountain was magic and impressive. The tremendous cheering, the joy expressed in every face, the vastness of the building, with all its decoration and exhibits, the sound of the organ… all this was indeed moving.’ (Quoted in Gibbs-Smith)

This is what Queen Victoria wore to the opening of the exhibition. If you were going to attend the opening, what would you wear? 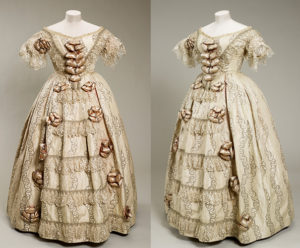 So, what was it like for the average person visiting the Exhibition? What was their experience?

The Great Exhibition was the first time that nations came together in peace, not war. Each participating country brought its finest representation of culture and industry. The showcase was unlike anything that was ever seen before!

Since the exhibition showcased enterprise, workers received holidays just for the purpose of attending. Trains brought them to London by the hundreds. Eight hundred agricultural workers from Surrey and Sussex went in their traditional attire. They traveled with their clergy and for a modest cost that might have been underwritten by the sponsoring enterprises. One farm implement company sent workers in two hired train cars with sleeping berths and a place to cook. (Tomlinson)

The Blandydashes were of humble means and traveled the seventy miles to London by pony and cart. It took three days to get there but was well worth it. The Crystal Palace rose up among the towering trees and the banners of all the nations wafted in the breeze from its roof, leading Mr. Blandydash to say: ‘there it is, there it is, and I mean to say it does great honour to the mighty Prince Albert who invented it… That the sort of thing, my dear, to take the shine out off all the foreign kings and empires, popes and nabobs.’ (Banks)

Dogs were not permitted inside and there was no smoking allowed. Modern conveniences were bountiful. Public lavatories and restrooms were available for the first time. The Chelsea Waterworks Company provided free filtered water and over a million bottles of soft drinks were sold. There was a fountain in the Austrian Court offering free samples of Eau de Cologne and the Saxony Court offered free chocolate drops! (Beasland) It was also the first time many people tasted set jelly and ice cream!

The building was laid out in four divisions with the countries nearest the Equator in the middle and colder countries located farther away down the corridors. The north side displayed Raw Material. The south side displayed Produce. The Center was reserved for Manufacturers and Fine Arts. The central passage leading from the transept to the west held products of the Colonies. (Beasland)

People came from far and wide to attend what can be considered the first World’s Fair. They wore everything from traditional garb to their Sunday best. For six months they traveled in whatever way they could to get there in order to experience things they’d only heard about and were now able to see, touch, hear, and taste! They also received a glimpse into the culture of the countries participating in the Great Exhibition of 1851. And… the world got a little small.

From ‘The trip to the Great Exhibition of the Blandydash family’ by Mr. Banks, London, 1851. Houlston and Stoneman, Paternoster Row, 1851 (NAL EX.1851.216)
http://www.vam.ac.uk/content/articles/t/travelling-to-the-great-exhibition/

From ‘The Cyclopaedia of Useful Arts’ by Charles Tomlinson, London, 1852. http://www.vam.ac.uk/content/articles/t/travelling-to-the-great-exhibition/