Bathing by the Seaside during the 1800s

By the 19th century, men and women regularly went to the seaside for summer recreation. But, decorum dictated that women cover up from prying eyes as well as the sun. Women were also required to use bathing machines (think cabana on wheels) to access the water. With all these layers of ‘red tape’, it’s a wonder why any woman would even want to go into the water. But, we went into the water, heavy wool and flannel and all. We must be a strong sex as to not have drowned from the attempt to be socially correct!

So, what did we wear?

Unlike men, who could bathe in their underwear, women’s mode of dress for bathing in the sea changed little during the 19th century. Cumbersome was in and practicality was out when it came to women and the water.

“A gown of white French cambric, or pale pink muslin, with long sleeves, and antique cuffs of thin white muslin worn over trousers of white French cambric, which are trimmed the same as the bottom of the dress. A figured short scarf of pale buff, with deep pale-green border, and rich silk tassels; with gloves of pale buff kid; and sandals of pale yellow, or white Morocco, complete this truly simple but becoming dress.

Serge or dark flannel became the norm during the early Victorian era. Amelia Bloomer’s ‘Turkish’ pants came into fashion for summer beachwear during the mid-19th century. Still made of flannel, these two-piece bathing suits featured a belted bodice that resembled a jacket.

Things had not changed much by the 1890s. Women’s swimwear was still made of heavy fabric, with wool being a favorite. Puff sleeves and sailor collars adorned knee-length dresses that covered bloomers or drawers. In addition, long black stockings, bathing slippers, and fancy caps could be seen on the well-dressed beachgoer. 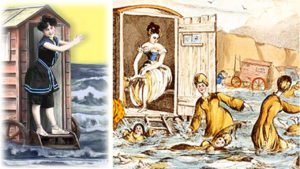 And what about those bathing machines?

As if wearing all of this hot black fabric and accouterments wasn’t enough, women had to use the bathing machine to access the water. These cabanas on wheels lined the ‘women only’ beaches. They featured two doors – one to enter from the beach, and one to exit into the water. Women could change into their bathing suits inside the machine.

With the assistance of a strong female attendant and often a horse, the machine would be hauled out into the surf where the bather would exit, sometimes through a canvas tent for added privacy, into the water. The attendant would help women into and out of the water. Sometimes a rope was attached to the bathing machine, allowing for greater freedom and safety in the water. To see a good example of this, watch one of my favorite movies, The Ghost and Mrs. Muir.

Bathing machines had holes in the floor for drainage and a hole in the roof for light. Once they became obsolete in the 20th century, bathing machines morphed into cabanas. You may even be able to see one along the seaside today!