Recollections Gathers for an Afternoon of Fun, Food, and Festivities

August in Northern Michigan is called “heaven on earth” by many of our visitors. We’re lucky enough to call it home. There is no better time for celebrating summer than August, and no better place than on the shore of one of our lakes. So, this past weekend we gathered at Hoeft State Park, just north of Rogers City, on the shore of Lake Huron, for the first annual Recollections picnic. Recollections is more than a place to work, it is a family, and it was time for a “family reunion.” 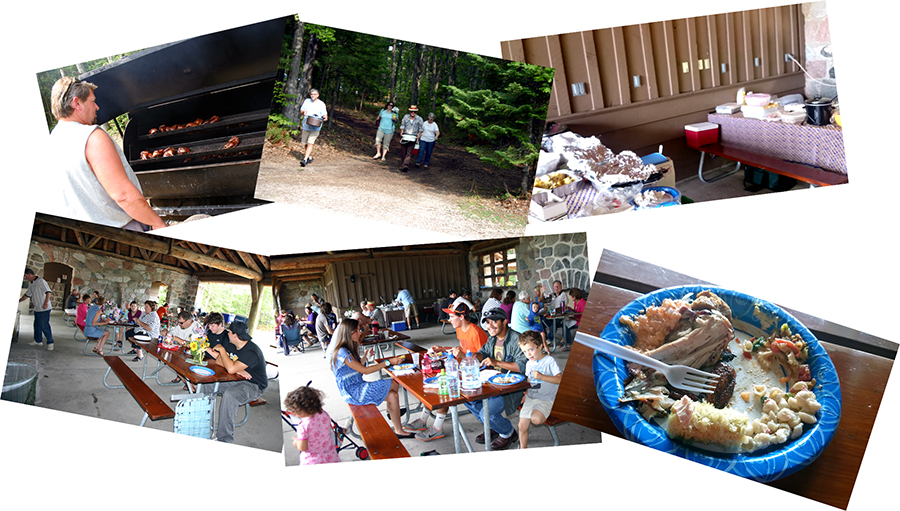 Saturday dawned sunny and seasonably warm. There was a nice breeze and no rain in the forecast. It doesn’t get much better than that! With the festivities slated to start at 11, Val and John got out there early to fire up the grill and the get barbecued chicken started.

Soon, everyone started to arrive. Charlie manned the parking lot to guide everyone down the right path to the pavilion. Thank you, Charlie! With everyone bringing a dish to pass and the chicken on the grill, all we had to do was follow the wonderful aroma.

It’s a good thing everyone brought their appetites, as there was plenty to share. We were able to sample the “fruits” of everyone’s gardens and family farms, including Charlie’s sweet corn. It was so yummy as was John’s chicken! Salads and desserts rounded out the offerings. Designing and sewing aren’t the only talents among us. There sure are some excellent cooks and bakers in the Recollections family! 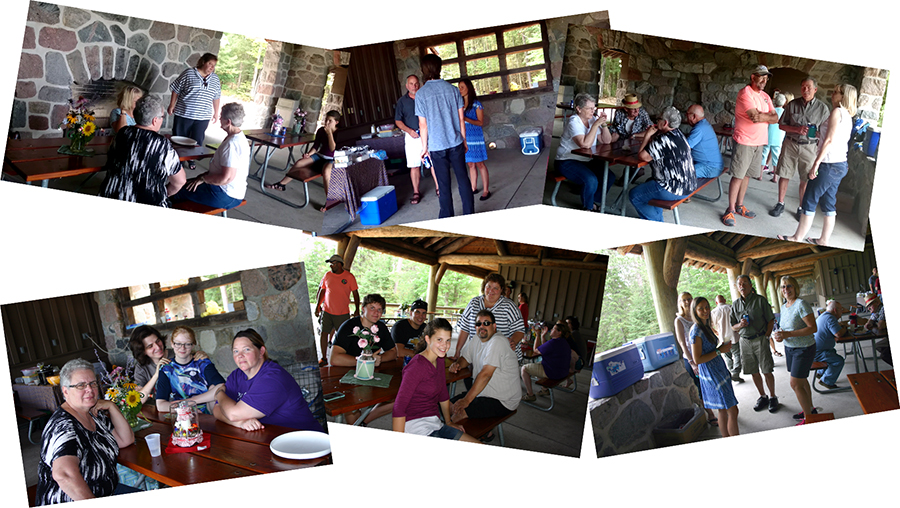 After lunch, we had time to visit and to play. The Recollections seamstresses had a jar decorating contest where the rules were to use components from the sewing room and to be creative. There was a contest that everyone could enter, too. Two jars filled with candy and a watermelon made up the contest. We were to guess how many candies were in each jar and how much the watermelon weighed.

Once everyone who wanted to participate had a chance to do so, Val and Nate looked at all the entries and determined the winners. Andrew came closest to guessing the right weight of the 12 pound 1 ounce watermelon. Sisters Alicia and Sarah independently guessed the closest amount of candies in one jar. Boy, were they surprised! Sisters – can’t argue that kind of connection. Mike guessed the exact amount of 81 pieces of candy in the other jar. The prizes were the yummy watermelon and candy jars. Good thing sisters know how to share! 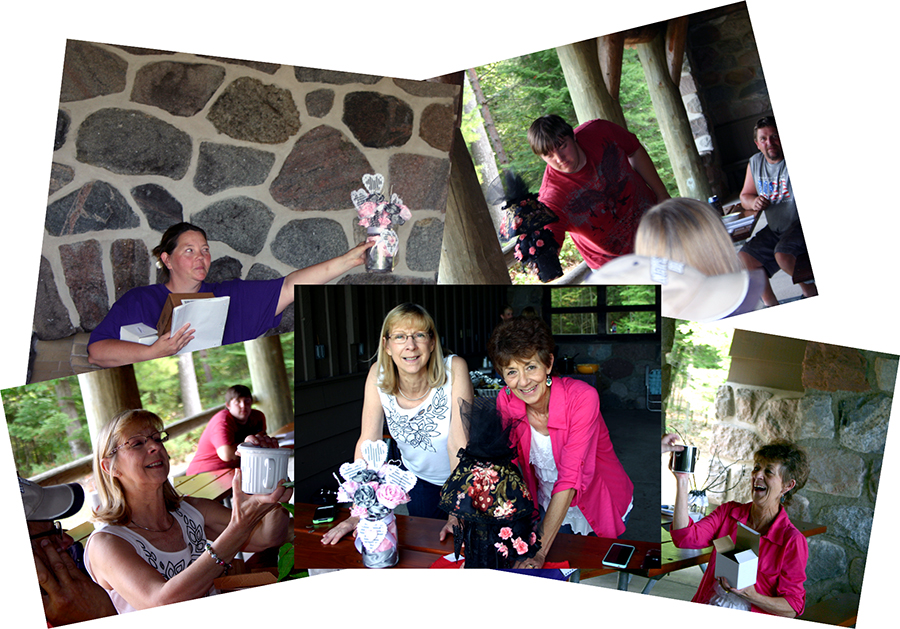 Next came the winners of the jar decorating contest. All the decorations were creative and fun to see. There was a tie between the rose and heart adorned jar made by Pam and the one that resembled a Victorian lamp made by Deb. Their prizes were a soup mug with a cover and a coffee mug. Beautiful job, ladies!

Games on the Grass 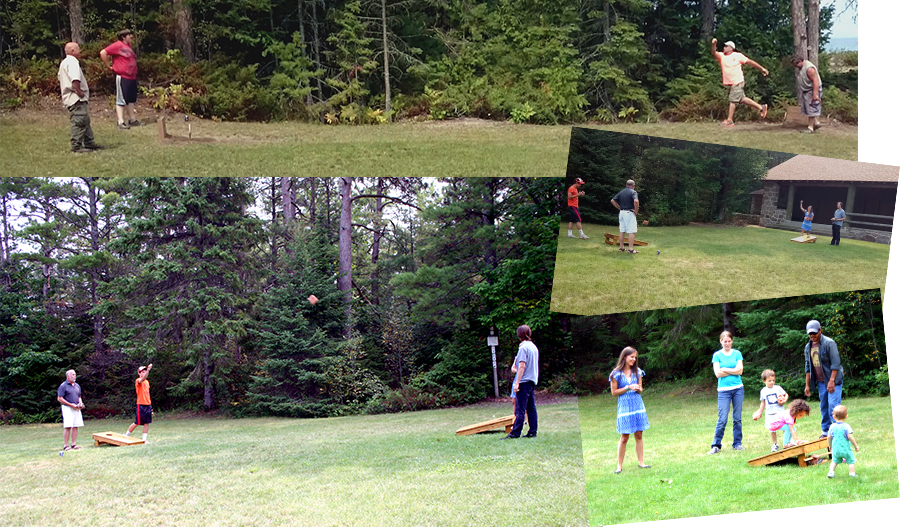 Hoeft State Park is a beautiful place to relax and have some fun. We sure enjoyed the rest of our afternoon enjoying each other’s company and taking part in some family fun. Horse shoes was favored by the guys while couples and families played bean bag toss. Some of us just enjoyed the sand and grass between our toes!

Last One in the Water is a Rotten Egg! 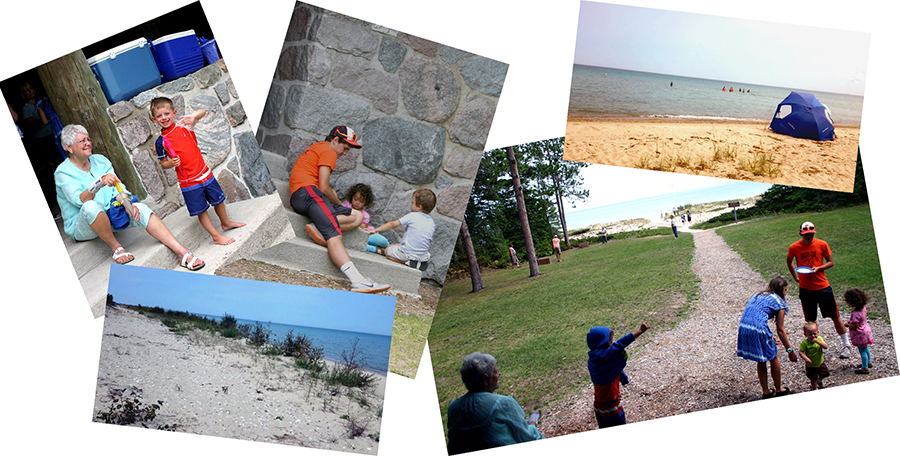 The day was also perfect for spending time on the beach and in the water. Lake Huron’s gently pulsing waves along with the warmth of the sun proved to be the perfect lure to wind up our afternoon swimming and playing in the water.

Before we knew it, our time together was over and it was time to head home. What fun we had and memories we made! We’re already looking forward to the second annual Recollections picnic next summer.