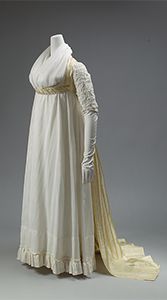 Although King George III’s son didn’t become Prince Regent until 1811, the Regency Period in fashion is generally regarded as the years 1795 through 1820-ish. Fashion in 1795 was influenced by the aftermath of the French Revolution when people wanted to remove themselves from the aristocracy. Women’s garments swung from what was seen as opulent frivolity to the ‘ age of undress.’ Individuality was valued over social status when it came to what women wore. People started dressing based on their own daily routine.

For women, Tightly laced corsets and brocade gave way to a celebration of the natural form. A woman’s body shape was to be celebrated. Bodices were short with waistlines falling just below the bust. Fabrics were light to the point of being sheer below the bodice, which made them easier to keep clean. Because gown fabrics were so light, women’s fashions consisted of three layers. A Primer on Regency Era Women’s Fashion by Kristen Koster is a fine resource on this topic. Excerpts are found below.

Many of the undergarments women wore during the Regency period resembled their Victorian cousins. The first layer was a chemise made of white cotton and having tight, short sleeves. The neckline varied whether one was dressing for day or evening. There were no embellishments as they were designed to be washed regularly. Their second purpose was to prevent airy muslin or silk dresses from revealing too much of the natural form.

Corsets were not generally needed under these high-waisted fashions. However, in lieu of a proper brassiere, women wore a short corset or ‘stays.’

A lady might add a high-collared chemisette to add a layer of modesty.

Although they were considered racy and a proper lady would never be known to wear them, women started wearing ‘drawers’ during this time.

‘Drawers’ consisted of two short pant legs that tied at the waist.

Stockings were made of white or pale flesh-colored silk or knitted cotton and were held up by garters below the knee.

The layer between the undergarments and outer garments consisted of a ‘petticoat.’ This garment was sleeveless and had a scooped neckline. It was designed to be seen since a lady would raise her dress to protect it from becoming wet or muddy. Because of this, petticoat hems were often decorated with rows of tucks, lace, or ruffles.

‘Undress’ was the style of the day, casual and informal. It was the type of gown a woman wore from morning until noon or later depending on her social engagements of the day. Dress material was often made of gauze or muslin. Cotton batiste was also a popular choice. Satin was sometimes worn for evening wear.

‘Half Dress’ is thought of as how one would dress when going out during the day or meeting with guests.

‘Full Dress’ was what a lady wore to formal events, day or night. ‘Evening Dress’ was only appropriate at evening affairs. Think of it as ‘Full Dress’ taken to the hilt.

Examples of gowns a woman would have in her wardrobe during this time period include morning gowns, visiting gowns, walking gowns, promenade dresses, carriage dresses, riding habits, dinner dresses/gowns, and ball gowns .

White was the color of choice at the beginning of the Regency period, although pastels grew to become acceptable. Women resembled statues from ancient Greece and Rome. The Empire silhouette elongated the body. Gowns flowed unimpeded by ornamentation. Ribbon often embellished the neckline and the waist, tying in the back. Whether sleeves were short for evening wear or long for daytime, the shoulder was poufed or capped.

Gowns slowly evolved between 1800 and 1815. The back inched higher and fullness was added in the back to allow for freer movement. Ornamentation returned to skirts. By 1820 skirts were fuller still and hints of things to come could be seen in a slight lowering of the waistline.

By 1825, waistlines once again traveled south to its natural position and by mid-decade, the classic ‘V’ bodice appeared. A great place to see this evolution is found at The Evolution of the 19th Century Gown: A Visual Guide by Mimi Matthews. Another excellent reference for this article came from

Outerwear was very important to women in the Regency period. The sheer and lightweight fabrics popular during the era could leave a lady feeling cold! Coat-like dresses called pelisses, spencer (waist-length) jackets, redingotes (riding coat), shawls, mantles, mantelets, capes, and cloaks were part of each well-dressed woman’s wardrobe. The Indian shawl was a favorite wrap that could be worn in drafty homes and when enjoying summer evenings.

Fichus were the triangular ‘scarf’ worn over a dress, especially during the day to add a layer of modesty to low neckline dresses. Reticules were small purses that women carried because dresses were not able to have pockets in them. Gloves covered every lady’s hand, especially in public or at social engagements. Pattens covered shoes and elevated the wearer out of the mud and water.

Stop by Recollections to see our full line of Regency period-inspired clothing and accessories!