Who was Bass Reeves?

When thinking of lawmen of the American Old West, minds drift to men like Wyatt Earp, not Bass Reeves. My first exposure to Bass Reeves came earlier this year. There is a program on AHC (American Heroes Channel) called “Gunslingers.” Bass Reeves was featured in one episode and I was riveted from the opening lines. He truly was an amazing lawman and perhaps, even the real ‘Lone Ranger,’ and his story is finally coming into the light.

Bass Reeves was the son of slaves owned by William Reeves, an Arkansas state legislator from Crawford County. He was named after his grandfather, Basse Washington. He followed William to Grayson County, Texas, and also served William’s son George, who was a state legislator in Texas. Until he was old enough to become a field hand, Bass was a water boy. When he was older, he asked to be taught to read, but was denied. However, George Reeves taught him about the business of farming and later made him his personal companion and body servant. Bass grew to be 6’2” and was known to be a man of manners and had a good sense of humor. 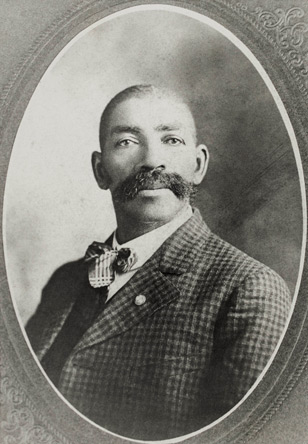 Texas sided with the Confederacy during the Civil War, so George Reeves took Bass with him into battle. There is some dispute over what led to a parting of the two during the war. Some say that the men had a dispute during a card game that led to Bass beating up George. Others say that he heard too much about freedom and ran away. In any case, he fled north into Indian Territory.

He found refuge with the Seminole and Creek tribes and spent his time honing his firearm skills. He never thought he was more than a fair shot with a rifle, he was a very fast and accurate shooter. He often found himself barred from competitive turkey shoots. This skill would become his best friend once he became a Deputy U.S. Marshal.

No longer considered a fugitive after the Emancipation Proclamation  in 1863, Reeves returned to Arkansas and bought land near Van Buren. He was a successful farmer and rancher. In 1864, he married a Texan, Nellie Jennie. Their family eventually grew to include 10 children, five boys and five girls.

The family’s quiet farm life changed shortly after the appointment of Isaac C. Parker as judge for the Federal Western District at Fort Smith, Arkansas on May 10, 1875. Indian Territory was a refuge for anyone wanting to hid from the law; murderers, thieves. Until Parker’s appointment, there was no federal or state jurisdiction.

Parker immediately appointed James F. Fagan as U.S. Marshal for the district and gave him the leeway to hire 200 deputies. Because Bass was familiar with the area and could speak several tribal tongues recognized as one of the greatest heroes of the American frontier.

To be continued…. Bass brings in more than 3,000 outlaws during his three decade career.

Information and photos were gleaned from the following resources: