Starting Bass in 1875, Reeves served as a Deputy U.S. Marshal on the Oklahoma Range, a territory that covered about 75,000 square miles. Often, he set out with a wagon, a cook, and a Native American posse man, and would travel to Fort Reno, Fort Sill, and Anadarko. The round trip was more than 800 miles.

His 6’2” frame cut an imposing figure; broad at the shoulders and narrow at the hips. He was said to have superhuman strength. He always rode a large white stallion. He was a snappy dresser with perfectly polished boots and a large hat on his head. His signature trademark was handing out silver dollars. He searched for outlaws, and when he found them, he brought them back to Fort Smith, Arkansas. (Sounds a lot like the Lone Ranger, eh?)

Reeves never let his lack of the ability to read or write affect his ability to bring in criminals. Before heading out, someone would read him the warrants and he would memorize which warrant was which. He never failed to produce the correct warrant when needed. 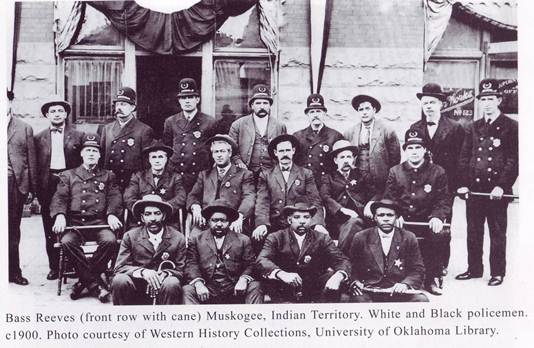 As a master of disguise, he just might be the first undercover lawman. Few people suspected a man of color of being associated with the U.S. Marshals and he used that to his advantage. His disguises include a cowboy, farmer gunslinger, or outlaw. He also used aliases. Reeves was also ambidextrous and wore two Colt .45 Peacemaker pistols, butt forward for a fast draw. All of this helped him return, often months after leaving Fort Smith, with a herd of outlaws. He made a handsome profit in fees and rewards, which allowed him to spend time with his family between excursions onto the range.

Over the course of his 32-year career, Bass Reeves brought in more than 3,000 outlaws, killing 14 in self-defense (more than Wyatt Earp, Doc Holliday, Billy the Kid, and Wild Bill Hickok), and wounding dozens more. He relied on toughness and his wits as well as tactics learned from the Seminoles where he could travel many miles quickly, leaving no trace of his trail. He never backed down and never backed away from executing a warrant, even in the face of bounties and death threats. At one point, he captured and brought in 17 prisoners single-handedly. Although he had his belt shot in two, his hat brim shot away, a button on his coat shot off, and his reins cut half by bullets, he never suffered a gunshot to any part of his body. His reputation as the most feared Deputy U.S. Marshal was well earned.

Reeves’ branch of the U.S. Marshals was disbanded in 1907. So, at the age of 70, he took a job with the. Muskogee Police Department, where he walked a beat downtown. It was reported that no crimes were committed on his beat. Perhaps, it was because he would have a sidekick with him who carried a satchel of pistols. He retired in 1909 and died of Bright’s disease (nephritis) on January 12, 1910.

to be continued… Bass Reeves – the Legendary Deeds

Information and photos were gleaned from the following resources: