Isabella Maria Susan Tod was born on May 18, 1836, in Edinburgh, Scotland. She died on December 8, 1896, in Belfast Ireland. What she did during her 60 years on earth is quite remarkable. Women in World History: A Biographical Encyclopedia relates that her biographer, Maria Luddy, observed that her life story represents the history of Irish feminism in the critical last four decades of the 19th century and was “the outstanding advocate of women’s rights during this period.” Who was Isabella Tod and why is she so important to Irish women’s history? 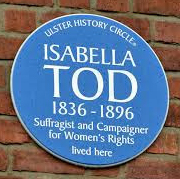 Recollections designs and manufactures history-inspired garments. We hope you found this article interesting and inspiring.