Born in 1820, John Redfern, was the son of a tailor. His father opened a specialty clothing shop in Cowes, Isle-of-Wight, England, in 1811. John followed in his father’s footsteps, opening up a draper’s shop in Cowes in 1855.

He was in the right place at the right time and a man who had the vision to see a need and fulfill it, defying some of the day’s conventions. By the 1860s, he attracted the attention of royalty. He designed for Alexandra of Denmark, who became Princess of Wales when she married Prince Edward in 1863. The fashion house closed out the decade by designing the wedding dress and bridesmaid dresses for the daughter of W.C. Hoffmeiter, an English aristocrat. In 1871, Redfern expanded the business to include silk dresses and mourning attire.

The Isle-of-Wight was the hub of everything yachting during the Victorian era. Women needed proper garments that were stylish in which they could ride, play tennis, or go yachting. His custom-tailored dresses and suits were so well received that women adopted them as everyday wear. Lillie Langtry was also one of his clients. ‘Jersey Lily’ (after her birthplace on the Isle of Jersey), as she was known, was a beautiful and popular actress. In 1879, Redfern designed a simple jersey traveling dress that was so popular that it remained in the line for many years. 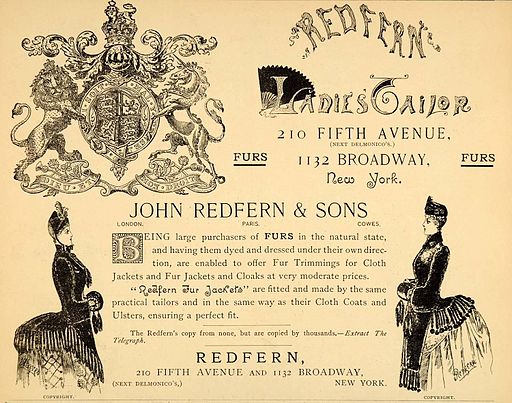 The fashion house experienced increasing popularity and was formally named Dressmaker by Royal Appointment to Her Majesty, the Queen, and Her Royal Highness, the Princess of Wales in 1888. The fashion house also served as Tailors by Appointment for Queen Emma of the Netherlands.

The fashion house also made changes that just weren’t done by couturiers – ever. Up until this time, customers traveled to the designer. He decided to go where the customers lived and expanded the business by establishing a fashion house in Paris in 1881, and two in New York in 1884 and 1885 (tailoring and furs). He also ran a successful catalog-style mail order business. 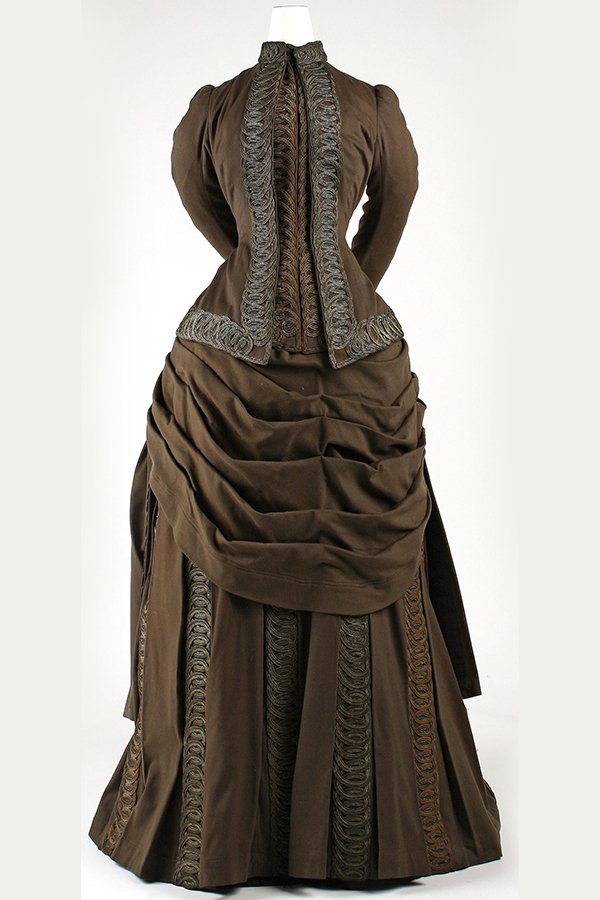 Brown Ensemble 1887-89, from the Metropolitan Museum of Art collection

John Redfern died in 1895. His tailor-made ensembles helped the dress reform movement of the late 19th century, and he is considered to be one of the first, if not the first, sportswear designer. The fashion house was taken over by his business partner, Charles Poynter, who added the Redfern name to his. He designed for the company until well into the 1920s. Charles’ story is one unto itself and will be told another day.

More information and wonderful examples of Redfern’s ladies’ tailored ensembles and dresses are found at: