Women in the Civil War

Nothing challenged Victorian ideology in the United States more than the Civil War. Women living during Antebellum America were the epitome of domesticity. The industrial revolution changed the way men worked. Men increasingly spent their work time away from home, moving into factories, offices, and shops. In what historians call ‘the Cult of True Womanhood,’ women devoted their lives to creating ‘haven in a heartless world’ for their husbands and children (Women in the Civil War). The war changed all of that for women on both sides of the conflict.

Well-off Southern women were eager to see their men go and fight for their cause and were one of the most effective recruitment tools the Confederacy had. They used every tool at their disposal to encourage enlistment, including shaming. 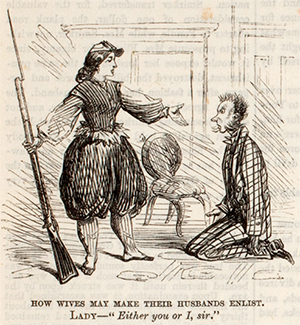 These wealthy white women were left to attend their husbands’ businesses, including the plantations. This responsibility allowed them to have a voice in society. They also had to continue running the household.

Poor white women in the South didn’t have the help running a household or the family farm. They were mothers and cooks with generally no agricultural experience. Food shortages were not uncommon and resulted in letters pleading from wives asking for their husbands to be allowed to return to help with crop production. Others went to work in factories, including those that made uniforms for the Confederate army.

Female slaves used the Civil War as an opportunity to escape. Plantations were less supervised. The women took advantage of the situation and escaped into Union territory to start anew. Many followed Union soldiers north during Sherman’s March. Although male slaves who made it to the North were considered free men, women and children were not and remained in limbo for the duration of the war. In March 1865, Congress enacted a law that freed between 50,000 and 100,000 women and children of men serving in the U.S Colored Troops. Many of these women found themselves in Washington, D.C. and could “enter schools staffed by black and white teachers and funded by northern relief societies.” (Giesberg)

Women on both sides of the conflict organized for their causes. They volunteered in hospitals rolling bandages and raised money to help supply troops with what they needed and to help injured soldiers.

Women were not allowed to serve as nurses at the beginning of the war. It was felt that no woman should have to witness the horrors of war. Injuries were so numerous that many men died from disease and infection. Finally, women could volunteer as nurses. The federal government created the United States Sanitary Commission in 1861 allowing women to go into army camps and hospitals and help. (Women in the Civil War)

Between 2,000 and 5,000 women volunteered as nurses on both sides of the conflict. Their duties including assisting in the operating room and dispensing medicine, cleaning, and bandaging wounds, and feeding soldiers. These women were called ‘Florence Nightingales.’ The most famous of them was Clara Barton, a clerk in the U.S. patent office. Her work in nursing earned her the nickname ‘Angel of the Battlefield.’ (Brooks) In addition to being nurses, women worked as laundresses, cooks, and matrons.

Although they were not allowed to fight, between 400 and 600 women took up the cause alongside their loved ones in the conflict. How did they get past the Union and Confederate armies? The physical exam consisted of a check of the mouth for the condition of the teeth. If you had enough teeth and you could hold a musket, you were in. The minimum age for soldiers was 18 in the North, but it wasn’t too difficult to get around that because both armies often looked the other way. The South had no age restriction. Many of the young male soldiers were teens so it was easy to fit in with the right clothing, hair, and attitude. (Righthand)

Women also served as spies on both sides of the conflict. Flirting with soldiers at social events was their main way of garnering information. They were also smugglers. They would move supplies, ammunition, and medicine across enemy lines under their hoop skirts. (Brooks)

By the end of the war, women and how they thought about themselves fitting into society was changing. They worked outside of the home. They contributed to the greater good. Although they went back to being mothers and wives at the end of the war, the experience was not lost on them or the nation. The changing role of women was spurred on by the war and there was no turning back.

See our line of fashions inspired by the Civil War era.

The Changing Role of Southern Women During the Civil War

The Civil War and the Southern Belle

The Roles of Women in the Civil War

Women in the Civil War

The Women Who Fought in the Civil War