What would a Pre-Victorian School Teacher wear? 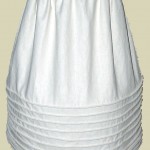 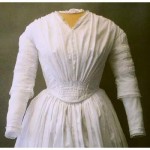 In the early 1800’s, there was not public education as we know it. Wealthy families hired tutors for their children, and for the working-class poor, school was not an option. In the late 18th century a tailor named Thomas Cranfield offered free education for poor children in London. In 1798 Cranfield established a free children’s day school. By the time of his death in 1838, he had established 19 free schools. In 1818 John Pounds, known as the crippled cobbler, began teaching children for free. His reputation as a teacher grew, and he soon had over 40 students. After Pound’s death, Thomas Guthrie wrote Plea for Ragged Schools (referring to the poor – or ragged children) and credited John Pounds with the idea. In 1844 Lord Shaftesbury formed the Ragged School Union. Over the next eight years over 200 free schools for poor children were established in Britain.

In the early 1800’s, teachers were usually men. However there is evidence that women also taught school. Working in the poorest districts, teachers were usually local working people, and had no claim to higher education themselves. The curriculum had an emphasis on reading, writing and arithmetic, but sometimes expanded to more pragmatic offerings, like industrial and commercial skills.

Assuming a lady teacher was a working middle-class woman; her dress would have been in keeping with the current fashions of the day. Her dress (1820 – 1836) might be a Lowell Mill day dress, or a Full Crown Dress. In the 1840’s her dress might have been a Fan Folded Front dress or a Round Dress. This period was in the “Era of the Hoop”, however not all women – especially working women – wore them. Probably they wore a corded petticoat, which was not so full, but still kept the skirt away from the body, as modesty made it important that the form under a dress be suitably concealed. She would wear sturdy flat shoes or boots, and her long hair would be gathered up into a bun.

I also found this humourous list of “School Rules” from 1872, which outline the duties of a teacher… This was presented without documentation of provenance.

1. Will fill lamps, trim wicks, and clean chimneys.
2. Each morning teacher will bring bucket of water and a scuttle of coal for the day’s session.
3. Make your pens carefully. You may whitle nibs to the individual taste of the pupils.
4. Man teachers may take one evening each week for courting purposes or two evenings a week if they attend church regularly.
5. After 10 hours in school the teachers may spend the remaining time reading the Bible or any other good book.
6. Women teachers who marry or engage in unseemly conduct will be dismissed.
7. Every teacher should lay aside for each pay day a goodly sum of his earnings for his benefit during his declining years so that he will not become a burden on society.
8. Any teacher who smokes, uses liquor in any form, frequents pool or public halls, or gets shaved in a barber shop will have good reason to suspect his worth, intention, integrity and honesty.
9. The teacher who performs his labor faithfully and without fault for five years will be given an increase of $.25 per week in his pay providing the Board of Education approves.