The Victorian Vest aka: The Waistcoat

The waistcoat (commonly called a vest in American English) is a sleeveless upper-body garment. For men, this item is usually worn over a dress shirt and necktie and below a coat as a part of most men’s formal wear. It is also sported as the third piece of the three-piece male business suit, now commonly called a vested suit.  The waistcoat is one of the few articles of clothing whose origin historians can date precisely.

King Charles II of England, Scotland and Ireland introduced the waistcoat in October of 1666 as a part of correct dress during the Restoration of the British monarchy. It was derived from the Persian vests seen by English visitors to the court of Shah Abbas. The most famous of these was Persia’s ambassador to the court of St. James, Sir Robert Shirley; an Englishman who had been a traveler in Persia for years.

“Vest” was the original term for the garment; the word “waistcoat” derives from the cutting of the coat at waist-level, since at the time of the coining, tailors cut men’s formal coats well below the waist. An alternative theory is that, as material was left over from the tailoring of a two-piece suit, it was fashioned into a “waste-coat” to avoid that material being wasted, although recent debate has cast doubt on this theory.

In Victorian times, we find examples of vest-like garments for ladies. Sometimes they are knitted, and sometimes elaborately embellished. Our pragmatic fore-mothers were never beyond adapting a piece of gentlemen’s clothing for their own use. Usually, these vests were worn in a casual setting, mostly when the lady was at home, while social visits usually called for the traditional long skirt with a fitted jacket or bodice.

Several bodices – most notably the “French Bodice” were made to appear as though a jacket was being worn over a vest; though in reality the “vest” was a panel sewn in to the front of the bodice to appear as though it was a separate garment. In this way, the lady could have the appearance of a vest without the extra bulk that might have made her tiny waist appear larger. 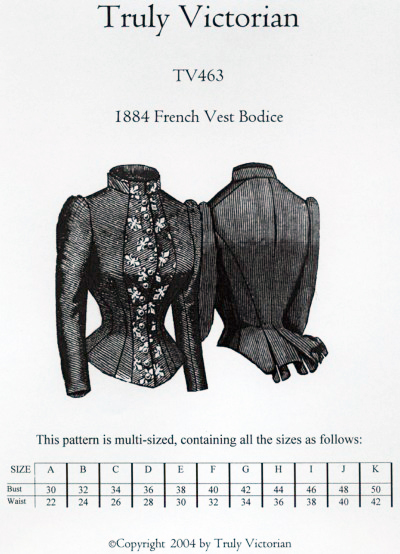 Today’s women have adopted the vest as their own, wearing it with everything from T-shirts to frilly dresses. Women’s vests are versatile, universally flattering, and comfortable as well, so it makes sense to incorporate one into your wardrobe. At Recollections, our seamstresses have created several styles of vests for both ladies and gents. Our ladies vests especially help to carry that special romantic flair that our clients have come to expect. Some have rich details like velvet collars, or rows of decorative buttons, others have figure-flattering extended peplums. They can be made up in any fabric from crisp calico to sturdy tweed or pin-striped wool. You will find something to enhance every wardrobe while keeping you cozy in cool weather. You will find that a lovely vest will become the go-to item in your closet for every occasion.

Here are a link you might find interesting: http://www.victoriana.com/waistcoat/