The Victorian Skirt – from Petticoats to Bustle: Part 2

Enter the Bustle Riding on a Train

1870 was the year of the train, and it was not the one that runs on tracks. Ball gowns sported long beautiful trains and within three years only walking dresses remained floor-length. The soft bustle was also riding high in 1870. While there was some fullness at the front of the skirt, most of it was planted firmly at the rear. Elaborate folds and draping required a lot of help to maintain its shape. The bustle provided support and tapes held the fabric in place. 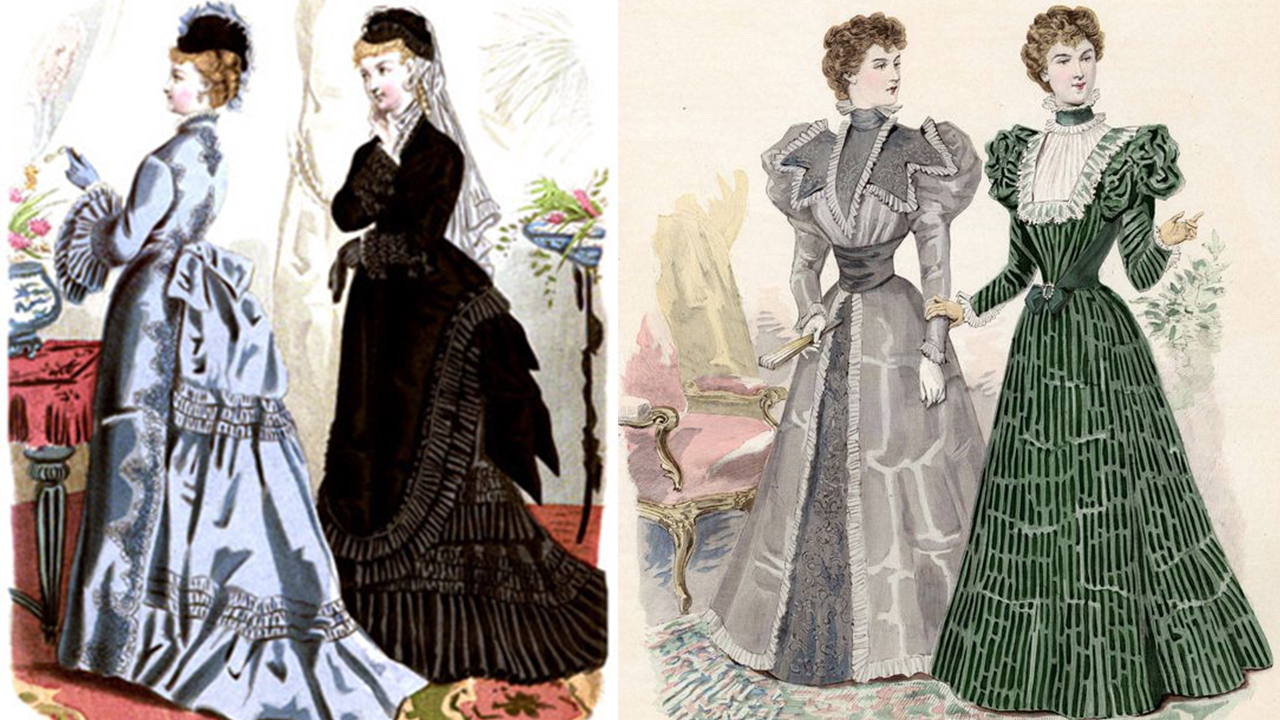 Underskirts were required and received as much attention as the overskirt. Horizontal lines were back in style with pleats, ruching, and frills appearing on underskirts.

Overskirts were fitted over the bodice. At the beginning of the decade belts with a large bow at the back made the two pieces appear as one. A short detachable overskirt, known as a basque, was a popular addition. This overskirt eventually made its way to the bodice, which evolved in 1873 into the Victorian interpretation of the polonaise that was popular during the 1770s.

The bustle began to fade around 1875 becoming smaller and smaller until it was replaced by a tiny hoop that kept the skirt from tripping up the wearer. This created a more sleek vertical line that was enhanced through vertical trimmings.

A Brief Departure from the Bustle

The cuirass bodice, a form-fitted boned bodice that reached below the hips, gained popularity starting in 1876. This bodice, with the sleek silhouette it helped to create, was paired with the long-trained skirt for a new fashion turn in 1880. The bodice and skirt were joined into one piece with one panel from shoulder to hem. This was known as the princess line style. Trains were longer than ever and a small pad helped the train maintain its drape as it fell to the floor.

This style lasted only three years. The rigid bustle dress was introduced in Paris in 1880 and suddenly gained popularity in 1883. This time, the bustle was molded to the body and created a silhouette that resembled the hind legs of a horse. Skirts returned to floor-length. Beadwork often created motifs on the flat front and sides of the skirts. High poufs and draping dominated the back of the skirt. Soon, attention was given to the front of the skirt in the form of swags. As the decade unfolded the skirt became an art form unto itself as poufs, swags, pleats, and draping became more complicated. Dresses were heavy, often weighing 15-20 pounds. 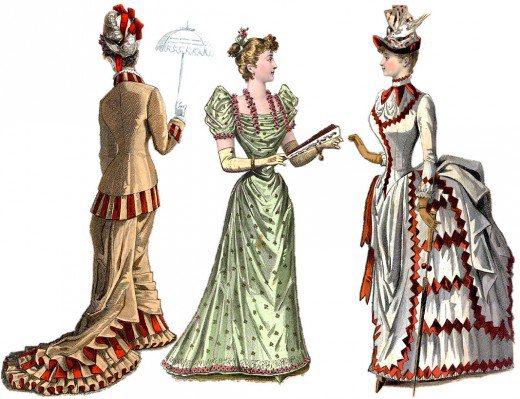 It’s no wonder that the bustle disappeared for good by 1890. Once again fashion resembled the pre-bustle resurgence of 1883. Flat fronts and long full trains were the features of the day. Skirts were at their widest in 1896, often reaching six yards around! As tailor-made styles continued to make inroads, the shape of the skirt changed to resemble a trumpet; more closely fitted at the hips and flaring from the knee to the hem. Trains were minimal or non-existent.

There was a hint of what was to come in fashion during the 1890s. The uncorseted tea gown gained acceptance for wearing at home. By 1897, the tea gown broke out of the home and was seen for the first time in public at fashionable summer resorts in America.

Each link leads to the various decades comprising the Victorian era.