The Most Extraordinary Story of Sister Blandina Segale – Pt. 1

Sister Blandina Segale has been in the news lately. Earlier this month, the Archdiocese of Santa Fe (New Mexico) closed its inquiry on why she should become a saint in the Roman Catholic Church. The file has been sent on to the Vatican for consideration. So, who was Sister Blandina and how did her path as Servant of God bring her to this place and time?

Roots in Italy and Ohio

Maria Rosa Segale was born on January 23, 1850 in Cicagna, Italy. It is a small mountain village located near Genoa. Her family immigrated to the United States in 1854, following the dream of a better life. Life in Cincinnati was a struggle for the family, but her father built a business that started with a produce stand and grew into a produce store.

As a child, she attended schools conducted by the Sisters of Notre Dame de Namure and the Sisters of Mercy. Her first contact with the Sisters of Charity of Cincinnati came during her post-grammar school years at Mount St. Vincent Academy. She watched their work among the sick, orphans, and as Civil War nurses. She decided this is what she wanted to do with her life and joined the Community in September, 1866. Afterward, she was known as Sister Blandina. 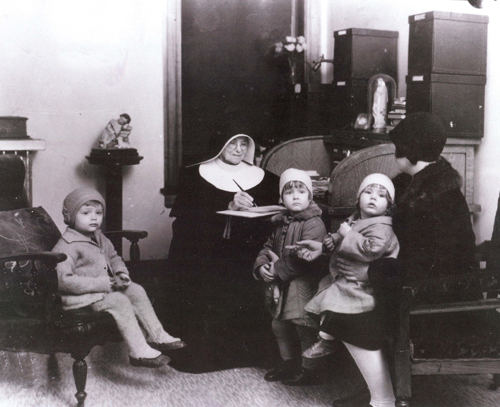 Sister Blandina is Called to Work in Colorado Territory

Six years after starting her service as a teacher at schools in Ohio, she was sent, alone, over the Santa Fe Trail to Trinidad in the Colorado Territory in 1872 to teach in the public school. In 1877, she moved to Santa Fe where she served in the schools, orphanage, and hospital operated by the Sisters of Charity. She also served in Albuquerque, where she taught and opened a Wayfarers’ House and became a defender of Native Americans and Mexicans. She returned to Trinidad and spent a short time in Pueblo, Colorado before returning to Ohio in 1893.

to be continued… “What makes her work in the American Old West extraordinary?”

Recollections designs and sews history-inspired fashions for women. We hope you are inspired by this incredible woman from history.