The Rookery is one of the most historically significant buildings in Chicago. It was added to the National Register of Historic Places in 1970 and was designated a Chicago Landmark in 1972. This architectural masterpiece was designed by Burnham and Root. It was completed in 1888, during the building boom following the Great Chicago Fire. It was considered the largest and finest office building in the United States.

So, how did the Rookery get its name? It comes from a municipal structure that stood on the site for many years. Pigeons and crows had a fondness for hanging out and nesting on the building. 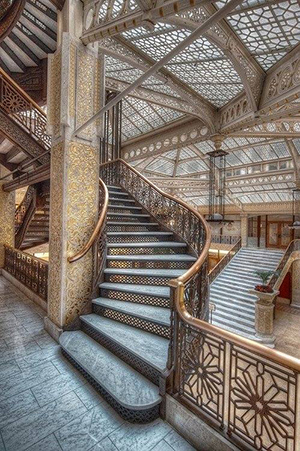 Photo by Stuart Grais by way of Steampunk Tendencies. Does this remind you of M.C. Escher?

The atrium went through a series of renovations between 1905 and 1992. The first was commissioned to Frank Lloyd Wright in 1905 and completed in 1907. His vision balanced Burnham & Root’s ornamental ironwork. He enhanced the natural light coming in through the glass ceiling by painting the steel beams white. Wright enhanced the original molding of white marble embellished with gold geometric patterning by using white marble to hide some of the copper-plated ironwork. He also added decorative urns at the bottom of staircases and new light fixtures. The result was an open, airy space that was inviting and intriguing.

William Drummond, a former Wright assistant, completed the second renovation in August 1931. Art Deco detailing was added. The building was modernized in other ways too, including new elevators.

Over the years, the atrium ceiling was covered over to prevent leaks. The third renovation took place in 1992 and enabled light to once again fill the lobby and restored much of the building to its original grandeur.

The Rookery is located at 209 South LaSalle Street. Visit the building on Tuesday, Thursday, or Friday if you’d like to take a tour. The tour is 30 minutes long and costs $10 for adults. Still photography is allowed and photo sharing is encouraged. What fun it would be to dress up in one of Recollections’ Victorian or Edwardian fashions and take some photos in the atrium!