Going Under the Dress: Victorian Undergarments

Today our underwear is glorified in events such as the annual Victoria’s Secret Fashion Show and billboards by the road. But, let’s take a trip back to a time when a G-string wasn’t dreamed of and a woman’s undergarments were as secretive as her heart. That’s right—we’re going to the Victorian Era. Victorian undergarments were similar to clothes that you might see just walking around on the street today. However, a woman needed to keep her undergarments guarded and hidden because such strict social chastity rules were in place.

Victorian undergarments changed over time and with the different stages of the Victorian Era. Beginning in the 1830s and then peaking in the 1850s, drawers were the most common lower-half undergarment. These could be tight, wide-legged, flared, and have intricate details like lace and embroidery. Drawers that were tapered at the knee with a band were called knickers. Petticoats were also needed underneath hoops and crinolines not only to help keep hoops in shape, but also to ensure that the women who wore the skirts weren’t hurt by them. These pieces were paired with tops like chemises and camisoles. These plain, tank-top-esqe shirts went underneath corsets and gowns and were usually undecorated. There were even combinations, which combined camisoles and knickers into one wardrobe piece, resembling a romper that we may see today. However, this garment didn’t really hit it off until the Edwardian Era, because it was a more simplified version of the other undergarments and was not considered “high fashion.” 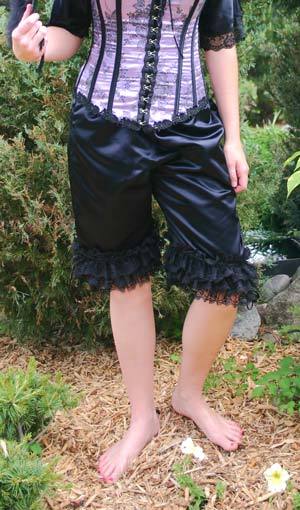