Menlo Park and the Light Bulb

As a young girl growing up in New Jersey, history was interesting but mainly taken for granted. We were surrounded by historical markers for everything, including many that inferred ‘George Washington slept here.’ My father’s brother and his family lived in Edison and for a long time, I noticed but wasn’t interested in the little ‘lighthouse’ we passed as we exited the highway and headed for their home for a visit.

One day, curiosity got the better of me and I asked my dad what the light was about. After all, it shone both day and night; it was always shining whenever we passed. He told me that the place was Menlo Park and the light was a replica of the first incandescent light bulb developed by Thomas Edison. It had been shining all his life. Wow, as a little kid, that was the equivalent of a million years! It is now a museum that is open to the public. 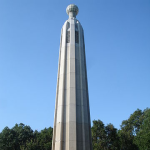 Electricity Comes of Age during the Victorian Era

We take electricity and non-flame illumination for granted, but this memory got m thinking about the development of the light bulb and electricity. We all know about Benjamin Franklin and his experiments, but when did electricity become the stuff of the common man? It came to us during the Victorian era, of course. And, the most important decade was the 1880s.

Alternating current is the basis for how most of us receive the power that operates in our homes and businesses. It is still converted to direct current when delivered to our devices, appliances, and machines, as AC is great for traveling long distances along transmission lines, but DC is best for operation.

The first full AC power system in the world was developed in 1886 by William Stanley in Great Barrington, Massachusetts. The system was funded by Westinghouse. But, without an efficient AC electric motor, the idea of AC floundered. The puzzle was being solved by 1890, and in 1891, the first distance transmission of electricity took place in Germany when electricity was sent 109 mile from Lauffen to Frankfurt.

Westinghouse built the power system for the Adams Power Station at Niagara Falls in 1895 and by 1896, power was being sent 25 miles away to Buffalo, New York. Electricity is still produced by the Niagara Falls power plant.

The Advent of the Electric Sewing Machine

By the time electricity was becoming commercially viable, the Singer company already had a human-powered (treadle) sewing machine that revolutionized the garment industry. The first electric sewing machine was introduced by Singer in 1889. It was used in the industry and not designed for home sewing. Although the first home sewing machine was introduced in the United States in 1856 by Isaac Singer, the cost was prohibitive. Home sewing machines continued to use pedal power until well into the 20th century. By the end of the World War I, Singer was offering electric machines in addition to hand and treadle. 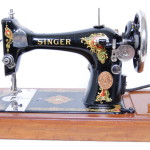 Electricity brought us two wonderful things, if you like to sew. The ability to light our homes without the use of a flame and a sewing machine that wasn’t like running a marathon to use. Thank you to all of the inventors and scientist/engineers who pioneered electricity and the sewing machine! two things that allow us to sew well into the night!