Long before Twiggy and Jean Shrimpton, there was Evelyn Nesbit, who is considered to be America’s first super model. But, how did she attain this status and that of sex-goddess?

Her story begins in Philadelphia. She was discovered at the age of 14 as a stage performer. A product of the Victorian era, she embodied the paradoxes of society at the turn of the 20th century. She was the picture of Victorian sentimentality and purity, but her bewitching smile promised something new and forbidden. It’s no wonder that when she came to New York City in late 1900, she would find herself an overnight sensation as an artist’s model.

At first, thanks to the help of artist James Carroll Beckwith, she posed for painters and sculptors. But, with the advent of commercial photography, she quickly moved into posing for magazines and advertisements. She was the inspiration for sculptor George Grey Barnard’s famous piece Innocence (at the Metropolitan Museum of Art) and Charle Dana Gibson’s Women: The Eternal Question (1905). She also appeared in illustrated magazine covers such as Vanity Fair, Harper’s Bazaar, The Delineator, Women’s Home Comanion, Cosmopolitan, and Ladies’ Home Journal. She also appeared in advertisements for everything from face cream to toothpaste. Her likeness could also be seen on postcards, tobacco, cards, calendars, and even sheet music covers.

By the time she was 16, she was a Floradora Girl in the chorus of the musical with the same name, as well as a model. She was also the breadwinner in her family, as her father had passed away some years earlier. She soon left the chorus line for a speaking role in the Broadway play, The Wild Rose.

While she was in the chorus, she met New York architect and socialite, Stanford White, about 30 years her senior. He’s responsible for the second Madison Square Garden, Tiffany’s, Washington Square Arch, and Cornelius Vanderbilt’s mansion. He soon became her lover and benefactor. Her family lived in an elegant apartment and he bestowed extravagant gifts upon them.

He lived an extravagant life and was known as a voluptuary. He even had a red velvet swing installed in his luxurious apartment, which was located above the FAO Schwarz toy store on West 24th Street. A somewhat autobiographical movie, The Girl in the Red Velvet Swing, was made in 1955 starring Joan Crawford as Evelyn Nesbit.

Following her involvement with White, she had a short relationship with John Barrymore, who had seen her at least dozen times in The Wild Rose. He asked her to marry him, but she turned him down. 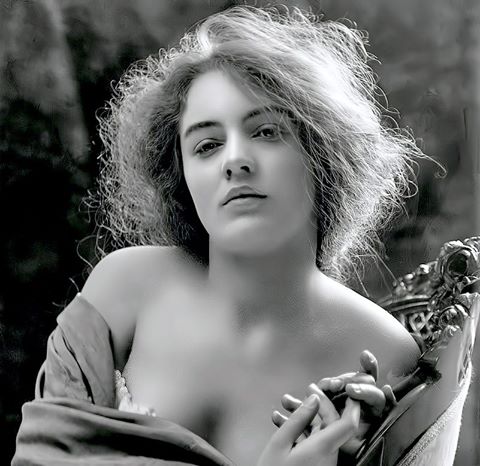 Many men vied for her attention, but it as Harry Kendall Thaw who eventually won her hand in marriage (it took him four years of pursuing her to do so). Unfortunately, he was self-indulgent, reckless, and insanely jealous. This resulted in the murder of Stanford White, the man Thaw referred to as ‘The Beast’ because of liberties he took with Nesbit while she was still a minor. The murder took place during the finale of the musical, Mam’zelle Champagne on June 26, 1906, at the rooftop theatre located at Madison Square Garden. Thaw shot White three times at point-blank range, killing him instantly.

The Trial of the Century

This resulted in what was called ‘The Trial of the Century.’ Church groups lobbied to restrict media coverage of the sordid details that came out in the trial, and although censorship was threatened, it was never carried out. This trial marked the first time that a jury was sequestered, so as to protect them from all of the publicity surrounding the trial. Originally convicted and sent to the Matteawan State Hospital for the Criminally Insane in Beacon, New York. He escaped to Canada in 1913, but was extradited back to the U.S. He was declared sane in 1915 and released from custody.

Evelyn Nesbit went on to be an actress in silent movies, appearing with her son, Russell Thaw, in at least six of them. She divorced Thaw in 1915 and married dancer Jack Clifford in 1916. The marriage lasted only two years, when he couldn’t live with the notoriety any longer. She divorced him in 1933.

Over the course of her life, she owned a tearoom (speakeasy), worked in burlesque, but not as a stripper, published two memoirs, and taught ceramics and sculpting at the Grant Beach School of Arts and Crafts during World War II. She died at a nursing home in Santa Monica, California on January 17, 1967 at the age of 82.