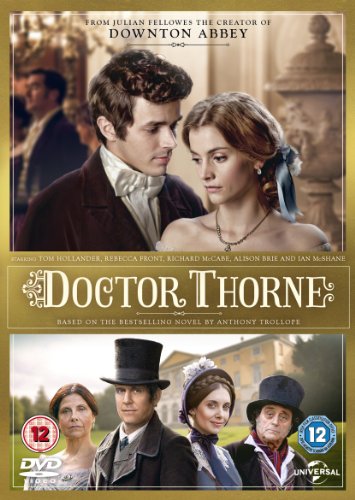 If you are familiar with Downton Abbey, you are familiar with Julian Fellowes. Downton finished its six-season run on PBS in January and many of its fans are happy to see Julian Fellowes back on the screen. This time, he’s adapted Anthony Trollope’s 1858 novel, Doctor Thorne, into a four-part miniseries that has been streaming on Amazon Prime since May 20. It may not be a long-term solution for those missing Downton, but it should be a nice digestif.

Julian Fellowes is a big fan of Anthony Trollope’s. In an interview with Caitlin Brody at the Entertainment Weekly website, he explains why he likes the author. “His emotional position is very similar to my own in that nobody is all good or all bad. His characters have a mixture of ruthlessness and toughness with inner decency. I’ve always wanted to see more of him on television, instead of it always being Jane Austen or Charles Dickens.”

The story centers around Mary Thorne, who was raised by her uncle, Dr. Thorne. Mary learns that her past if filled with abandonment by her mother and the murder of her father. This could prove disastrous for a young woman in the mid 19th century, but Mary does not become a victim, she stays strong. She things her social rank will make her an unsuitable bride.

She is unaware of the plight of her love interest, Frank Gresham, who must try to marry well to save the family from debt incurred through gambling. The family prefers Miss Dunstable, a rich American who is used to matrimonial pursuits for money. She likes Frank’s honesty about his feelings for Mary as he pursues her.

Hinckley relates that “secrets tumble together with some very bad behavior and some noble behavior to rearrange the social, financial and romantic playing fields.”

In keeping with strong heroines, Mary Thorne is a lot like Downton’s Mary Crawley. In the EW interview, Fellowes describes them as “strong women… clever women who wanted to have good lives, get around the rules, and find ways of expressing themselves.”

Thanks to Julian Fellowes, Anthony Trollope has a new audience with fans of the Victorian era.