Charles Dickens and A Christmas Carol

No other author conjures thoughts of Christmas like Charles Dickens. His story, A Christmas Carol, has been told and told again each year during Yuletide. It is a classic tale or redemption we enjoy experiencing as part of our holiday tradition. But while most people may be able to discuss the basic plot of the novella, not as many are aware of the fascinating and non-stop life of its legendary author. In truth, this Christmas hero lived a life as complex as any of his stories.

Charles Huffam Dickens was born on February 7, 1812 in Portsmouth, on the southern coast of England. He was the second of eight children born to John and Elizabeth (Barrow) Dickens. His father dreamed of riches and his mother wanted to be an educator but neither attained their goals. His father had a habit of living beyond the family’s means and by 1824 he was sent to debtors’ prison.

This was the end of Charles’ childhood. He was forced to leave school at age 12 and was sent to work at a boot-blacking factory on the Thames River. He earned six shillings a week. The abandonment and betrayal he felt would become a recurring theme in his stories.

An inheritance allowed John to pay off his debts and leave prison but by age 15, Charles had to leave school for good. He took a job as an office boy in a law office of Ellis and Blackmore where he made quite the impression as “a lively character, a skilled mimic, with an encyclopedic knowledge of London.”

Within one year he was a freelance law reporter in London. Within a few years, he was reporting for two major London newspapers including the Morning Chronicle. Charles Dickens had found his calling.

He published his first book, a collection of sketches submitted to various magazines and newspapers in 1836. It was called Sketches by Boz (a pseudonym based on his family nickname). He was still contributing to the Morning Chronicle’s evening edition. He was a frequent visitor to the editor, George Hogarth’s home. This is where he met his future wife, Catherine, onen of Hogarth’s three daughters. They married on April 2, 1836, and had 10 children before separating in 1858.

The year 1836 was memorable in other ways, too. Dickens finished The Pickwick Papers and started work on Oliver Twist (the first Victorian novel with a child as a protagonist). Queen Victoria enjoyed his writing and was known to stay up until midnight discussing Oliver Twist and Pickwick. These early novels, along with Nicholas Nickleby, The Old Curiosity Shop, and Barnaby Rudge: A Tale of the Riots of ‘Eighty started life as stories published in monthly installments before becoming bound books.

By the 1840s Charles Dickens had become the most famous writer in the world. After a lecture tour of the United States in 1842, Dickens returned to England and to writing. His works were not as well received as his earlier writings so he set out to restore his reputation. He did this through writing A Christmas Carol in 1843. He continued writing Christmas stories for the next two years, offering The Chimes in 1844 and The Cricket on the Hearth in 1845.

Writing Christmas tales did the trick. He went on to write many more stories including David Copperfield and Great Expectations. He also wrote travel books and plays. His plays were performed for Queen Victoria in 1851. He was also a touring lecturer who spoke out against slavery in the United States.

Charles Dickens’ final novel, The Mystery of Edwin Drood, was in progress when he died of a stroke in 1870. He left us a body of work that includes many stories considered to be classics today. But, no other story can compare to A Christmas Carol in its endurance as part of our culture. It’s retelling through the written word or as a play continues to enthrall audiences year after year. Thank you, Mr. Dickens, for giving us a holiday tradition!

Create a Dickens-era Christmas look of your own: 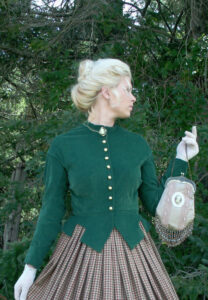 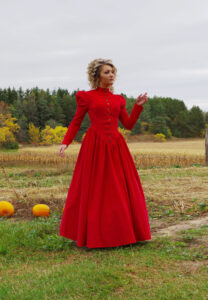 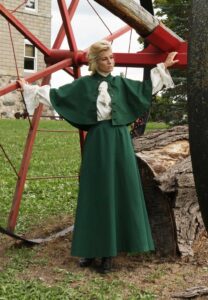 5 Fun facts about A Christmas Carol

Dressing for Your Dickens Event