One of the greatest inventions of the Victorian era is the sewing machine, but its roots run all the way back to the 18th century. After more than 20,000 years of hand sewing, and nearly 300 years after the advent of the first eyed needles, the first patent connected to mechanical sewing was issued in 1755. Charles Weisenthal was issued a patent for the needle, even though there were no plans for a machine in which it would work.

The first patent for a complete machine was issued in 1790, to English inventor and cabinet maker, Thomas Saint. However, later attempts to reproduce the machine from his plans didn’t work. This was followed in 1810, when Balthasar Krems invented an automatic machine for sewing caps. It never functioned well and he didn’t patent the machine.
A French patent was issued in 1804 to Thomas Stone and James Henderson for ‘a machine that emulated hand sewing.’ The same year Scott John Duncan received a patent for ‘an embroidery machine with mutliple needle.’ Neither of these were successful and soon forgotten. Another attempt in 1814 by Austrian tailor, Josef Madersperger, was also unsuccessful, although he did receive a patent for his work.

The first American sewing machine was invented in 1818 by John Adams Doge and John Knowles. This attempt was also unsuccessful as the machine failed to sew any useful amount of fabric before malfunctioning.

The Double-Edged Sword of Success

The first functional sewing machine was invented by a French tailor, Barthelemy Thimonnier. The machine used only one thread and was used for embroidery. But, it marked one of the first times that technological advances threatened jobs and was greeted with hostility by a group of French tailors. They were so enraged that burned down his garment factory and sent Mr. Thimonnier fleeing for his life!

The first somewhat successful sewing machine was built in 1834 by Walter Hunt, but he didn’t patent it because he, like the French tailors, thought the invention would cause unemployment. Twelve years later, the first American patent was issued to Elias Howe for ‘a process that used thread from two different sources.’
Around the same time, John Fisher invented a lace-making machine that could be considered a sewing machine, as it used the same principles as Hunt and Howe. But, his patent was misfiled, which caused him to have no claim to being the sewing machine’s inventor.

Isaac Singer first mass produced the sewing machine in the 1850s. His sewing machine used an up and down motion rather than side to side to sew, as Hunt’s and Howe’s machines did. Singer did use a lockstitch, the same as Hunt and Howe’s machines, however. Elias Howe sued Isaac Singer for patent infringement and won the case because Walter Hunt never patented his machine. 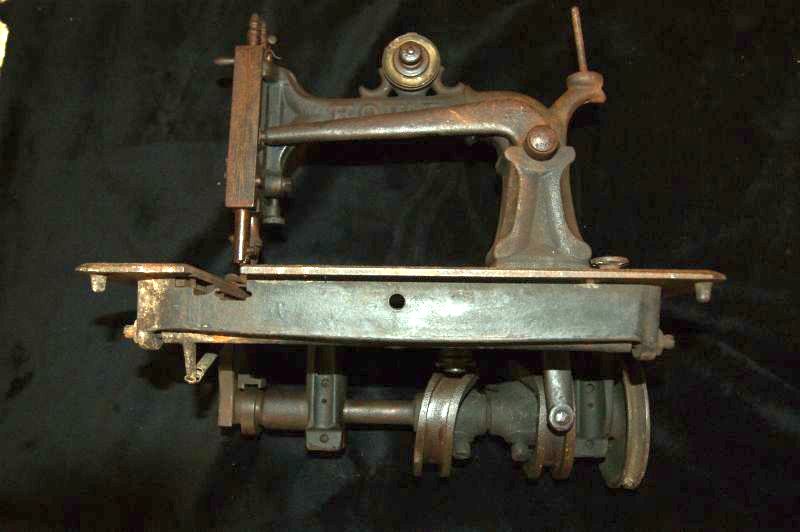 Regardless of who actually invented the machine, we are so glad they did. This opened up the world of fashion and allowed for the mass production of garments. It also created the opportunity to mass produce patterns for women who sewed at home (like me).