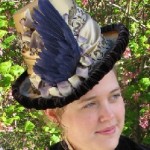 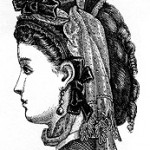 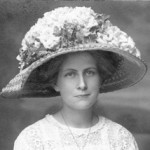 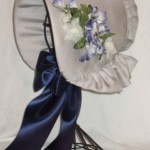 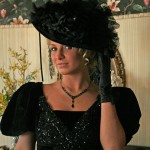 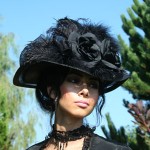 Just as most of us will not venture forth from our houses without makeup and earrings on, just so no self-respecting Victorian lady would leave home without a hat. For the purposes of this discussion, we divide the Victorian period into three parts; early (1844-1855), mid (1858-1870) and late 1872-1897 Victorian. Because we are all in love with those huge wonderful “picture hats” (ala “Titanic”) we will also touch on the Edwardian (after 1900) period. No discussion of hats would be complete without touching upon the topic of hairstyles, as the hairstyles tended to dictate to some extent how the hat rested upon the head.

It should be noted that Victorian women tended to wear their hair very long. Only young girls were permitted to wear their hair loose. Early Victorian hairstyles almost always featured a center part, with the sides of the hair are swept down and back from the face and cover the ears. Depending on the time of day, the hair may be coiled at the back of the head, or made up into elaborate curls at the sides of the face. Bonnets were the rule for early Victorian ladies, and we see styles that feature a very small crown at the back of the head, with large brims that come forward to frame the face. These bonnets were often elaborately decorated with ribbons and pleats, and almost always featured ribbons that tied under the chin to secure the bonnet. For summer wear, these bonnets would be made of woven straw, and for winter they would be of felt, or sometimes animal fur.

In the mid-Victorian period, bonnets were still fashionable, though the face-hugging brims tended to lift higher and wider than before, and we sometimes see that the underside of the brim is embellished with lace or pleated fabric. During this period, hats were also becoming popular. The hats were generally smaller than later periods, and usually featured a rounded crown and a narrow brim. The brim would often dip down in front and behind the head. Again, elaborate decoration was the rule, using ribbons and flowers crafted from fabric, often with one or more exotic feathers. While bonnets continued to use ties to secure them, hats required the use of hatpins.

During the late-Victorian period, bonnets fell out of favor, while hats climbed to new heights. Most hats still featured narrow brims, but the crowns grew much higher than before, and the Victorian Tall Hat became popular – complete with feathers and upright bows of stiffened fabric made them even taller. The passion for feathers and sometimes entire birds to decorate ladies hats nearly decimated several bird species. In the late 1890’s, ornithologists estimated that 5 million birds were being killed annually for the fashion market. The Audubon society was founded specifically to prevent these birds from being hunted to extinction. Still, fashionable ladies would not be denied their elaborate hats.

During the Edwardian period, hats became simply enormous. Hairstyles had evolved into elaborate affairs requiring hairpieces and “rats” – hair-stuffed forms that were placed under the style to give it shape. Hats were worn high on the head, and needed to be fairly large in the crown to fit over these larger hairstyles. In addition to being tall, hats were now very wide, and sported large brims. Hatpins were sometimes as long as 18 inches, and were considered dangerous in close quarters like streetcars. People complained that the hats were a nuisance at public events like plays and the opera, where they blocked the view of patrons behind them.

Shortly after 1900, hats became smaller and closer to the head, and the age of the really grand hats came to an end. Today we are seeing a revival of hat wearing – notably in the “Red Hat” movement, and also in re-enactment communities. Who can deny how special – and feminine – it feels to don a lovely hat and set out on your day?