The Victorian Dress for Riding

Victorian dresses were different depending on the occasion. Women had dresses for the morning, for daytime calling, and for dinner. And that isn’t even counting the intricacies in even just those categories. In addition, wealthier women had access to stables, which means that Victorian dresses for riding horses were not uncommon. These dresses were called riding habits. They were extremely intricate outfits, oftentimes having several pieces and parts to them, such as separate collars, cuffs, and hats.

Victorian dresses were typically long, reaching the floor and sometimes trailing behind the lady sporting the dress. However, riding habits were not long—they were shorter than the typical Victorian dress, because a dress that was too long could become tangled up with the horse and injure the rider. This was even more likely, since women were encouraged to ride sidesaddle. Riding sidesaddle may have been considered more ladylike, but it also was difficult to balance oneself and remain on the horse. So, women ditched their cumbersome petticoats and opted for a lighter dress, where they wore large bloomers underneath one or maybe two skirts. These skirts could even be weighted down with leather to ensure that they wouldn’t flare up with the wind and spook the horse. Women also wore long black leather riding boots to ensure that their legs would not become injured with any rocks or debris kicked up by the horse while riding. 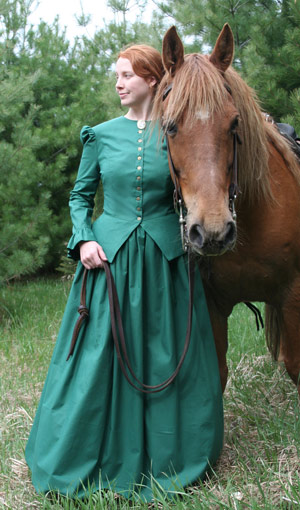 Hats were an important accessory, and actually liberated women in many ways. While dresses and riding styles remained feminine, riding hats were masculine. Many resembled the top hats that men wore in the evening or the three cornered hats that resembled military cornered hats. A veil would sometimes be attached to these hats to keep large dust particles from running into women’s faces while they rode. For a more feminine touch, feathers were included into the design of these hats. These could include large ostrich feathers or extravagant peacock feathers, depending on what style the woman wanted. These hats helped women assert their status in the riding field and make them equal to their male counterparts.

We have a variety of Victorian dresses at Recollections, and the riding habit is included in our collection. We have riding hats and riding ensembles that come in a variety of colors for your convenience. So, the next time you need to go to a reenactment or historical event where you will need to ride a horse or be by the stables, why not make your presentation truly authentic and appear in a proper riding habit? Click here to get started looking for the perfect Victorian dress for you!