Redfern – from John to Charles

Three years before John Redfern’s death in 1895, his sons took over the the company and changed the name to Redfern Ltd. This seamless transition allowed the fashion house to move forward, mostly through the creative thinking of his son, Charles Poynter Redfern (1853 – 1929). Charles was part of the third generation of Redferns in the fashion business. 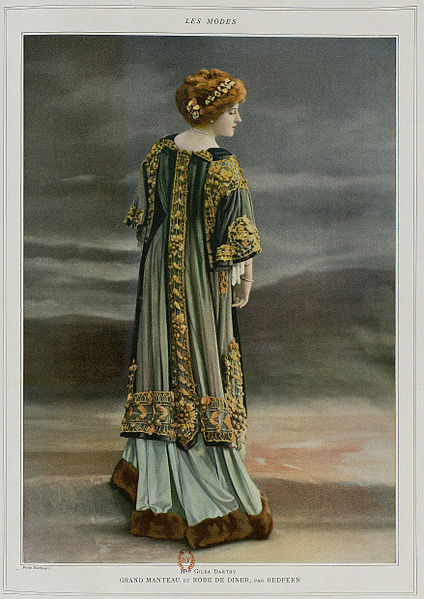 Head to Toe Fashion relates that Redfern was involved in scandal in 1892, the same year that the firm changed hands. Matilhilde Sabail was arrested in New York City after she posed as a wealthy woman traveling for pleasure, but was actually there to deliver a trunk full of fashions destined for Redfern’s location on Fifth Avenue. Once the ruse was exposed, she reported that ‘Redfern had given her £55 with which to pay the duties in case she could not get the goods through.’ Customs officials turned the case over to the United States commissioner. It was believed that she was one of many women engaged in smuggling fashions into the country in hope of avoiding customs and the duties owed on imported goods. This scandal evidently didn’t hurt the company, as Redfern Ltd. enjoyed much success in Haute Couture during the late 19th and early 20th centuries.

Under Charles Poynter Redfern’s guidance, the fashion house successfully transitioned from a women’s tailor to an international company equal to Charles Frederick Worth. Charles used Redfern’s employees to promote the fashions. These attractive young women became know as “Redfern’s Bunnies.” He was also known to be quite the director in the design studio. It wasn’t unusual to see two female assistants working furiously among mounds of fabric with Charles using a pointer to direct the whole affair like conductor guiding a symphony orchestra, instructing them to make adjustments from the comfort of a chair. 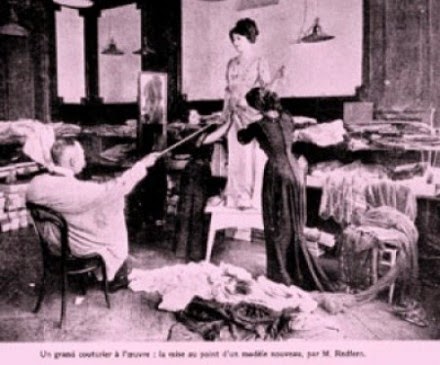 With his brother Ernest, they had branches on the Isle-of-Wight and Paris, where the company operated out of 242 rue de Rivoli.. Redfern helped to popularize the high-waisted Grecian style of draping in 1908. Redfern designs were featured illustrations in Gazette du Bon Ton during the early 1910s. The fashion house is also responsible for the first women’s uniform for the Red Cross.  It could be argued that under Charles, Redfern, Ltd. was the premier couturier in Paris until Paul Poiret made his debut in 1908.  Charles Poynter Redfern died in 1929. The fashion house did not survive to the fourth generation.