Gloves – a Part of Fashion for Nearly One Thousand Years

Gloves have been used by humans for protection since antiquity. One legend relates that gloves have been a fashion statement among nobility since the 11th century when, according to The Evolution of the Glove, “the Doge of Venice, Domenico Seivo, married a well-dressed Constantine who liked wearing them.”

Both Nobility and royalty enjoyed wearing gloves that were elaborately embroidered and adorned with jewels. The Evolution of the Glove relates that during the 16th century Mary Queen of Scots owned “beautifully made gloves embroidered with gold and silver and decorated with pearls,” and Queen Elizabeth I “favored richly embroidered gloves decorated with jewels.” She owned more than 2,000 pairs requiring their own wardrobe mistress to care for them.

According to the Encyclopedia Britannica, Catherine de Medici wore them to Court, helping to raise the popularity of gloves as a fashion accessory. She wore them perfumed, which legend states started as a “result of her attempt to cover the smell of the poisonous potions she used to murder her many enemies.” (The Evolution of the Glove) Gloves were often perfumed using ambergris, civet, and musk. The perfuming of gloves remained popular until the late 1700s.

Gloves from 1500s time onward were made from cotton, silk, kid, or were knitted. When short sleeves came into fashion in the 1700s, long gloves that reached from the mid-forearm or as high as the upper arm came into fashion. Popular hues included white and pastels.

Glove making became an industry in 1834, the Encyclopedia Britannica tells us, when “Xavier Jouvin of Grenoble, France, invented the cutting die tat made possible a glove of a precise fit.” Properly dressed women through the 19th century were never seen in public without gloves or fingerless mitts. Women would often order gloves that were intentionally snug, requiring a lot of time, glove stretchers, powders, and the help of a maid to get them on. When 12- and 15-button opera-length gloves came into fashion in the 1870s, buttonhooks were added to the list of requirements to put them on. By 1890, these gloves could have as many as 20 buttons!

Fingerless gloves or mitts were popular with those who liked to display their rings. They also allowed women to use their hands while keeping them covered. Fingerless gloves were made of the same fine materials as other gloves and came in a variety of lengths. They were often adorned with embroidery and even tassels. 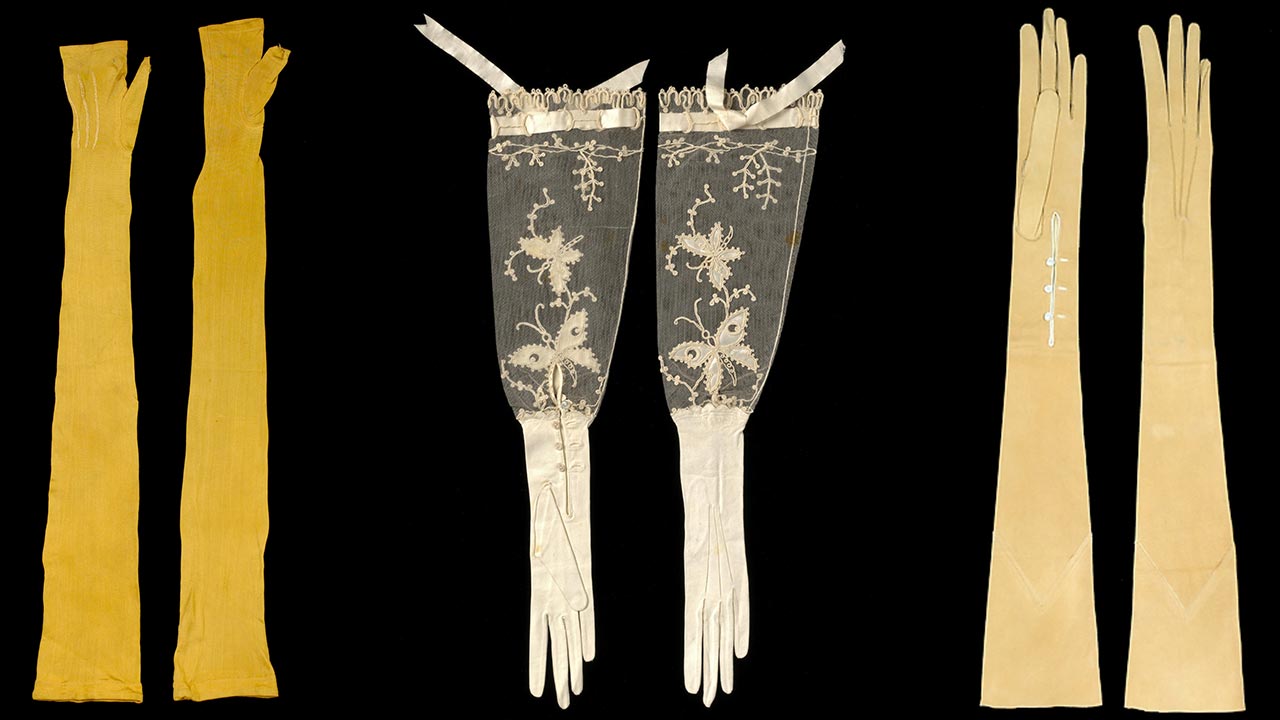 Opera-length gloves enjoyed popularity into the Edwardian era thanks to Sarah Bernhardt and Lillian Russell. Both actresses wore them in performance and in public. Gloves remained a popular accessory in women’s fashion until the 1960s when women’s attitudes toward convention came to the forefront. Gloves never went out of fashion completely. High-quality gloves remain desirable because of the quality of the materials and the craftsmanship that goes into creating them.