The world remains intrigued by the Jazz Age and the mystery and romance of the 1920s seem to only grow with time. The is something special about styles inspired by this moment in American history, whether it be perfectly curled hair with a feather headband or a “flapper dress” ready for the dance floor. But mass-produced costumes have come along with the interest, and authentic flapper fashion can be difficult to find.

We know our readers love to create looks that are true to the era they are inspired by, so we have put together this comprehensive guide to flapper fashion.

Find out how the real flappers looked and dressed instead of getting a Halloween or Hollywood version of it.

Chop The Locks And Say Yes To The Bob: Hairstyles 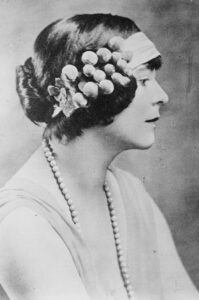 One of the most iconic looks of the 1920s is the bob hairstyle.

However, most people don’t realize that the era didn’t begin with the bob. Many women pinned their hair back in a sort of faux bob, and then cut it shorter later in the era when it was more socially acceptable. Movie stars like Gretta Garbo and Claudette Colbert began these fashion trends. There were still many variations of the bob, though. Some women had theirs short and straight and close to the head and face, while others had finger curls. Use the links below to create the perfect flapper fashion hairstyle. 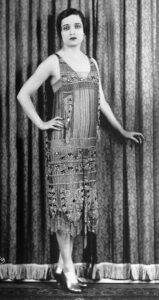 Many people love the flapper era because women began to show a little leg.

However, it wasn’t as immediate a trend or as short a skirt as the mass media often portrays. Hemlines generally went to about mid-calf, and women always wore stockings under their dresses. In the daytime, dark stockings were typical, but in the evening, wearing stockings that were one shade darker than your skin tone was acceptable. Shorter skirts were indicative of the sexual revolution that permitted women to embrace their bodies and step outside their traditional roles. A “boyish” look was associated with flapper fashion so bras were made to bind in breasts and the straight silhouette of dresses mirrored that of men’s style. 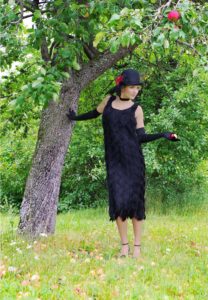 Pearls And Feathers And Much More: Jewelry

Triangular designs and smooth lines made women’s fashions ideal for new, interesting jewelry. Art deco jewelry was normally embedded with gemstones and other precious stones and metals, and they were oftentimes overstated and larger-than-life. Costume jewelry also became increasingly popular during this era because of the availability of plastics that replicated jade and amber perfectly. 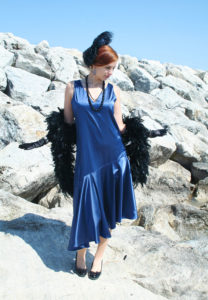 Flapper fashion makeup was all about eyebrows and lips. 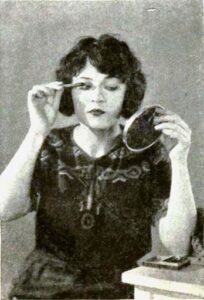 Clara Bow, a famous 1920s film star, showed off her lipstick and ignited other women to follow in her footsteps. Eyebrows were plucked nearly completely off and filled in with dark pencil, and dark red lipstick accentuated the “Cupid’s Bow” of the woman’s lips. In addition, using dark eyeliner around the entire eye was common. In general, women wanted to look younger, and rosy lips with wider eyes achieved this.

Create your own flapper fashion face

Far from the stilettos of today, the heels of the 1920s were made for practicality.

Women could be seen frequently dancing the Charleston and going out on their own. For that reason, shoes couldn’t be too hard to walk in. The heels were low and chunky, and there usually was some kind of T-Strap to make sure the foot was secure in the shoe. Decorative details, like patterns embroidered on leather and cutouts on the side of the shoe, were common. These made certain designers’ shoes more unique and desirable. 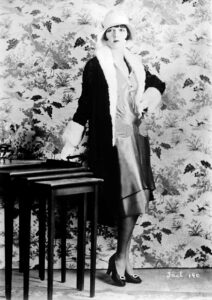 Women of the 1920s began to break down the social barriers that stood against them.

Their accessories weren’t just cloche hats and small embroidered purses; they were controversial items, like feather boas and cigarette holders. Women also carried cigarettes in decorated and extravagant cases, which were designed in the art deco style. In addition to controversial accessories, women could also be seen wearing fringed scarves to keep them warm. Handbags were small enough to carry only a few items, and they had handles instead of a long strap. 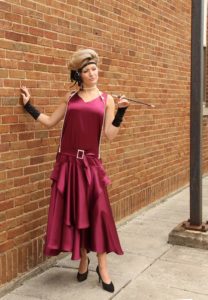 Attitude Is Everything: Behavior 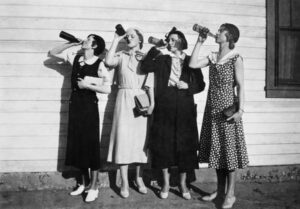 A significant part of the flapper image had nothing to do with the clothes.

Flappers wanted to break with the traditions and norms of society.  In 1920, women received the right to vote. Between that and the end of WWI in 1918, young people in 1920 wanted nothing to do with their parents’ way of living. Flapper women wore makeup even though it was considered promiscuous, went to dance clubs even though it was unorthodox, and chopped off their hair and hemlines in the name of liberation. If you want to dress like a flapper, you should embody the flapper attitude. Even though the clothes aren’t controversial by today’s standards, there would be no shorter skirts at all if flappers hadn’t begun wearing them.

You may also enjoy:

A chat with The American Prohibition Museum

The history of the suntan: Victorian era to Flapper era