Meet Mike and Kate Phillips, Co-owners of the Centennial Building

After speaking with Mike Phillips, co-owner of the Centennial Building in Alpena, Michigan, I was more excited than ever at the prospect of exploring the inside of this 1876 architectural celebration of the United States’ Centennial. Mike gave me an introduction to the history of this building that left me wanting to find out more and see the historical evidence for myself.

Mike asked me to enter through the front door on Chisholm Street. He and his wife, Kate, would meet me in the front room. I climbed the steps then had a “Wizard of Oz” moment. As the door opened, it was like taking a step back into the 19th century. I wasn’t in 2015 anymore. Mike and Kate extended warm greetings and we were off!

I was curious to find out how they came to own the building, so I conducted a short interview.

Me: How long have you owned the building?

Mike: We closed late on December 31 of last year, so we consider January 1, 2015 as the first day of our relationship with the Centennial Building.

Me: Wow! That’s not very long. How did you come to purchase the building?

Kate: We were interested in a church down the street that was for sale, but it was sold by the time we inquired. We were a little disappointed, but as we passed the Centennial Building on our way home, I told Mike, “that’s ok. I’d rather own this place anyway.”

Mike: Within a couple of weeks, the real estate company that occupied the first floor was gone and their sign taken down. I called them about the status of the building and was told it was sold. I thought we were too late, but I told the agent we were interested in making a bid should the sale not go through. We were shocked when the agent called a week later to let us know it was back on the market. The rest is history. I think the building heard Kate that day and decided we would be good caretakers. 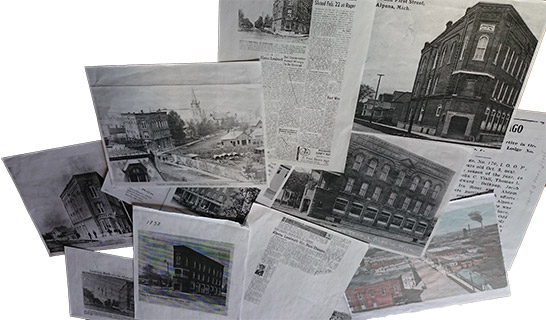 Mike had some old photos and newspaper clippings to spread out on the table. That is when the history lesson began. Mike provided me with the following historical information. 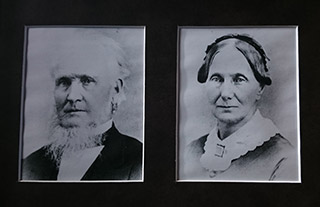 Samuel and Samantha Hitchcock, original owners of the Centennial Building

Samuel and Samantha Hitchcock were the original owners of the building. Samuel was a real estate developer who wanted to build something to commemorate the 100th anniversary of the founding of the United States. His original plan was to erect a two story building where Chisholm St., First Avenue, and Washington Avenue converge. The original design called for stores on Washington and living space on the second floor. He ended up with a three story building that was occupied on the upper two floors by the International Order of Odd Fellows (later known as the Independent Order of Odd Fellows), with retail space on the first floor. Samuel was a philanthropist and a member of the Odd Fellows. He was known as “Deacon,” but was not a leader in the organization. Ah, I found out what “IOOF” stands for in the decorative brickwork!

One of the first tenants was Mason’s Centennial Bookstore. It was run by Elizabeth “Miss Lizzie” Mason and opened around 1877. The bookstore sold books to the schools and was also the first library in Alpena. Miss Lizzie believed in education, especially that of young women, and was recognized for her efforts. There was a music store, known as the Music House located at the rear of the first floor. 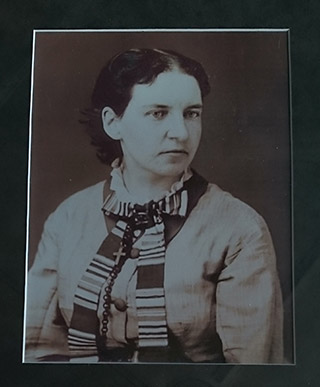 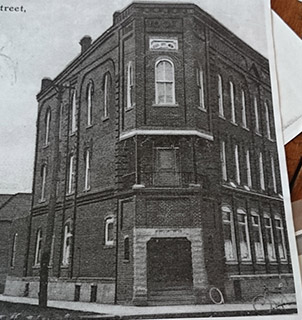 Centennial Building circa 1910, with remodeled façade

Join me next time for a tour of the Centennial Building and explore its rich history as it plays out on each floor. And remember, the Recollections fashion show takes place this Saturday, October 10, in what was the bookstore all those many years ago. Seating is limited to approximately 50 at this free event. Classical and jazz guitar composer and performer, Nathanael Koenig starts kicks off the festivities at 1 p.m. The fashion show, featuring styles inspired by the Victorian and Edwardian eras, starts at 2 p.m. Recollections models will be milling about the crowds at Lake Huron Discovery Tour events before the show.