New Year isn’t until next week, but I can’t help thinking ahead a little. What a fun time New Year’s Eve and New Year’s Day must have been during the Victorian era.

New Year celebrations have changed over time, even from the beginning to the end of the Victorian era. Prince Albert may have introduced the tradition of the Christmas tree from Germany, but Queen Victoria was obsessed with everything Scottish. There was no bigger holiday during the year in Scotland than New Year’s Eve and Day where it is known as Hogmanay or Hegmena and the Queen passed her passion on to her subjects.

Traditions associated with Hogmanay include gift giving, which was already popular in England. In wealthier households, New Year was the time for gift giving and payments of rewards to loyal servants.

‘First Foot’ is the Hogmanay tradition of bearing gifts as the first person to cross a threshold after the stroke of midnight. During Victorian times, the guest brought symbolic gifts of black bun (a rich fruit cake), shortbread, coal, salt, and whiskey. The gifts foretold the family’s fortune for the year. It was considered lucky if the gift giver was male and dark haired. Blonde hair was an omen for trouble, and women who were not home before midnight were often left wandering around outside until a dark haired male arrived at the home. 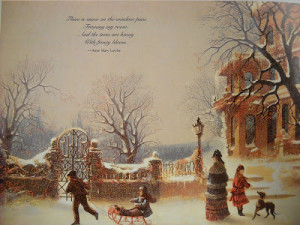 Another foretelling of the future was associated with what you were doing at midnight. It was thought that whatever you were doing at midnight would be what you would do for the coming year. This might be why going out and socializing was a popular thing to do at the New Year. Staying home and going to bed might foretell illness or worse during the coming year. Other superstitious include throwing out ashes from the hearth. Throwing them out the night before allows for a clean slate to start the new year right. Doing any kind of work, especially laundry was considered unlucky. Every person, no matter how young, should also have money in their pocket on New Year’s Day. To not do this was to risk poverty during the coming year. It was also considered unlucky to have fire leave the house in the form of a lantern or candle, as was having the fire in stove or hearth go out. 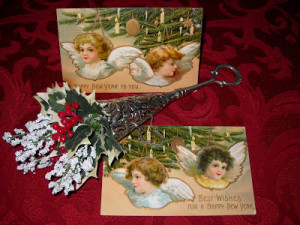 New Year’s celebrations moved from New Year’s Eve to New Year’s Day. During the latter part of the 19th century, the wealthy served guests a wide and varied buffet and egg nog laced with bourbon, rum, or brandy. Everyone donned in their holiday finery. Women and boys up to age 10 stayed home. Gentlemen visited many homes on New Year’s Day and eligible bachelors left their calling cards to show they’d visited. Sometimes, it was a competitive event to see how many homes could be visited and how many egg nogs could be drunk before the end of the day. Raucous behavior saw the holiday evolve from being an open house to invitation-only affair.

If you can’t get enough of everything Victorian, watch your local PBS station (Masterpiece Theater) in the United States and BBC in the UK. Emmy-winner Benedict Cumberbatch, and costar Martin Freeman will return as Arthur Conan Doyle’s classic Baker Street mystery solvers Sherlock Holmes and Dr. John Watson. However, the contemporary-set series will see them return to Doyle’s original 1890s London time period for a one-off episode.