Wedding Traditions from the Victorian Era

It’s crazy to think about where our traditions come from. The unexplained reasons behind why we do what we do sometimes bring us comfort, but when we learn their origins, they become even more meaningful . Many of the traditions that we still hold in weddings today are from the Victorian Era, over 100 years ago!

Take for instance, the “traditional” white wedding gown that’s so common in the western world. Well, the truth is that, historically, they weren’t always white. Most women just wore their best and most beautiful gown for their wedding. Queen Victoria was the one who popularized the white wedding dress in 1840, and ever since then, white wedding dresses have been the trend. Even though today dresses with splashes of color—blush, baby blue, lavender, even black—are gaining popularity, white is still the most traditional and popular color for wedding dresses. Queen Victoria’s daughter (also named Victoria), is also responsible for another tradition when she popularized the use of the “Bridal March” as the song to mark the bride walking down the aisle at her wedding in 1858. Although songs by artists ranging everywhere from Billie Holiday to Chris Brown are used for the Bridal Procession today, the “Bridal March” is still most iconically associated with weddings. 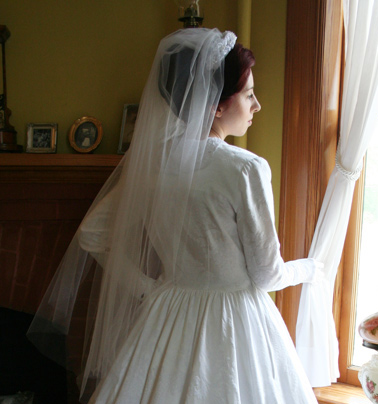 The Victorians were also the ones who kicked off the idea of an engagement ring that the hopeful potential groom would give his bride as a symbol of commitment. However, the wedding rings of the Victorian Era were not quite what we imagine when we think of our diamond studded bands of today. Instead of diamonds, wedding bands shaped like snakes with dotted ruby eyes were popular in Victorian England. The snakes were supposed to symbolize eternity.

Bridesmaids were present in Victorian English culture, just like in our culture today. However, while it’s considered rude for anyone other than the bride to wear white today, it was the complete opposite in Victorian England. Weddings were supposed to be white overall, with other colors only acting as an embellishment to white. So, bridesmaids would sometimes wear white veils and white gowns. Mother of the brides were supposed to wear black, unless they were “in mourning,” in which case they would wear purple or red, depending on where they lived and their local custom.

Victorian receptions didn’t last until the wee hours of the morning like ours do today. In fact, breakfast and brunch were normally held as wedding receptions because weddings themselves were in the early morning. There were three wedding cakes, one fruitcake for guests, one light cake for the bride, and one dark cake for the groom. Guests could take boxed cake with them on their way out to eat later, but the bride’s cake wasn’t touched. Instead, it was packed away and saved to be eaten on the couple’s twenty-fifth wedding anniversary. As soon as the cake was cut, the couple would change for their honeymoon. The difference between honeymoons of today and those of the Victorian Era were that nobody knew where the couple was going! Instead of bragging about their lavish trip, asking where the couple was going was considered in bad taste, and only the best man (who was sworn to secrecy) knew, as he helped them to the train station with their bags.

Victorian weddings were similar to what we typically celebrate today, and we can see where many of our traditions come from when we look at them. Because so many of the traditions of Victorian Weddings are still present in our culture today, we can only guess at what our great grandchildren will take from the weddings we have today!